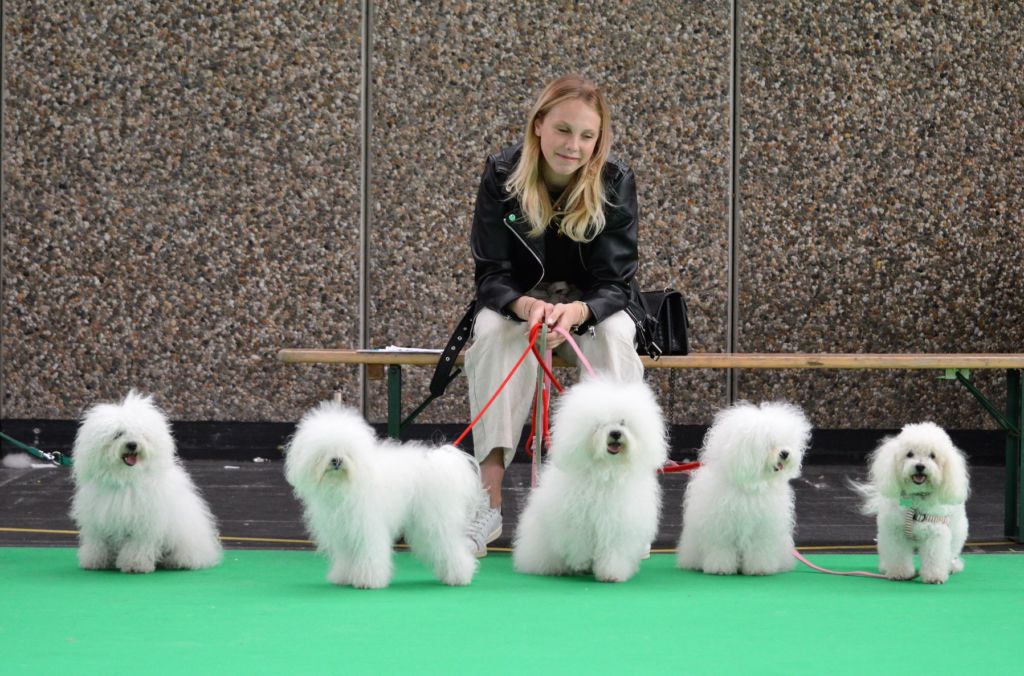 There have been quite a few shows in the UK since my last News Roundup, plus The World Show in Amsterdam which was attended by 3 exhibitors from the UK, with some brilliant results. We will report on Blackpool, Windsor, East of England, Leeds, Paignton & Bournemouth. If some shows are not covered in much depth, this is because people have not given me feedback. As I am not showing at the moment, I really need your feedback, please email info@bolognesedogclubuk.co.uk. This report provides links to 2 members reports on the World Show which are published on the club website. My thanks go to the regular contributors. 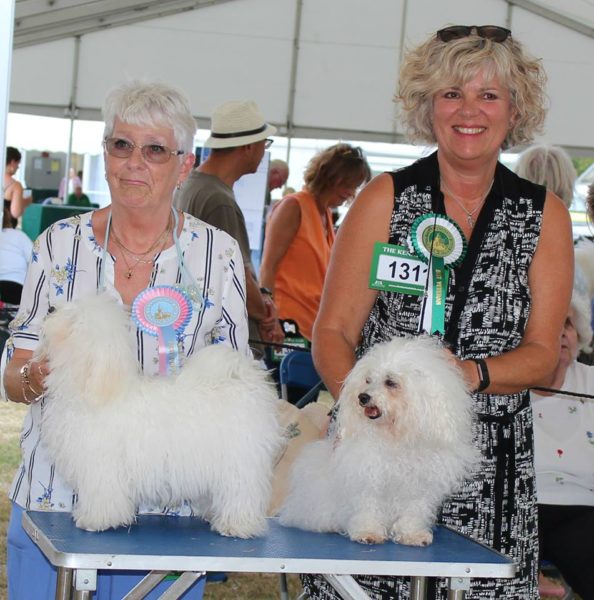 Windsor Championship show on the 28th of June was a lovely day and there was a good entry for our judge Frank Kane. The weather was hot, but there was plenty of shade in the marquees. It was the last show for my veteran Candy or Figgarony Andromache at Belstown at 10-years old she has loved showing, but it’s really time for her to retire gracefully. Candy was Best Veteran at Windsor although we could not stay for the group. BD & BOB went to Virginia Dowty’s Multi Ch Little White Wonder Othello Matteo and BB Hilary McArdell’s Tumbril Tantrams And Tiaras At Phendelle.

There was quite a challenge for BP at Windsor with 5 in the Puppy Bitch class. The award went to Gonni Torre Delle Passere With Devonia owned by Chris & Brian Thatcher. Bette Hopkins brought her puppy Enjanicka Toscana Ti Adoro out for the first time helping to produce a lovely puppy class. Also at Windsor club member Caroline Cockwell won her class with Devonia’s Lucca (PGD) as did Mr & Mrs FULLER with Rhosynangel Seren (PGB). Windsor was much better attended than Blackpool. 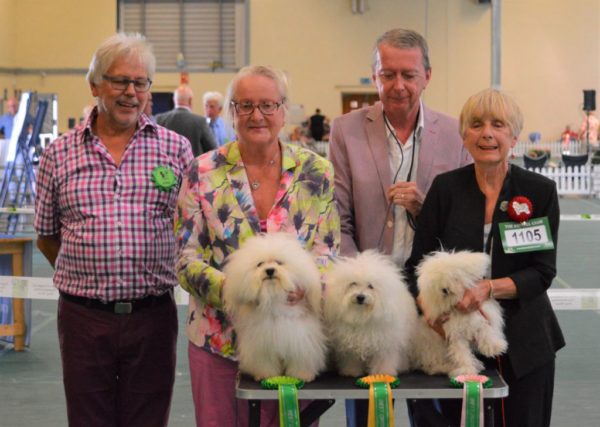 A few exhibitors made the trip to the East of England showground on the 6th of July where Stuart Band was the Bolognese judge. Once again Virginia Dowty’s LITTLE WHITE WONDER OTHELLO MATTEO took the BOB, whilst Carol & Dennis’s DONOCIELO SERAPHINA was BB and Bette Hopkins ENJANICKA TOSCANA TI ADORO BP.

Leeds
There was a slightly different crowd up in Leeds where our judge was Stuart Payne. The Open Bitch winner owned by Greta Franklin took the BOB spot, with BOS going to another Starexpress dog Italian Dream. Kathleen Holliday’s Belstown Merlau Black Bird was the winner of the Special Beginners class. club member Jane Towers won her class with Enjanicka Toscana Mio Caro and so did Shirley Hewitson with Belstown Cheeky Pumpkin At Moorhey. Entries were on the low side at Leeds.

Paignton & District
We did have some feedback from Jennie Hegarty who is new to showing as she qualified her puppy Enjanicka Toscana Amore Mio for Crufts at Paignton. Jennie said, “I was overjoyed with our success at Paignton although it was extremely daunting at the same time”.  A slightly more experience Multi Ch Little White Wonder Othello Matteo was BOB under Mr S Mallard with BB also going to Virginia Dowty’s Ir Ch Clynymona Jo I’m Alone and PB to Jane Towers Enjanicka Toscana Mio Caro. Jane also said that her puppy Caro was second in the Royal Canin Puppy Stakes under Mrs P Hollings with 28 entries and she was thrilled with her day. Only the 4 exhibitors attended Paignton, although is is never a busy show, because of the location and with it being always on a weekday. 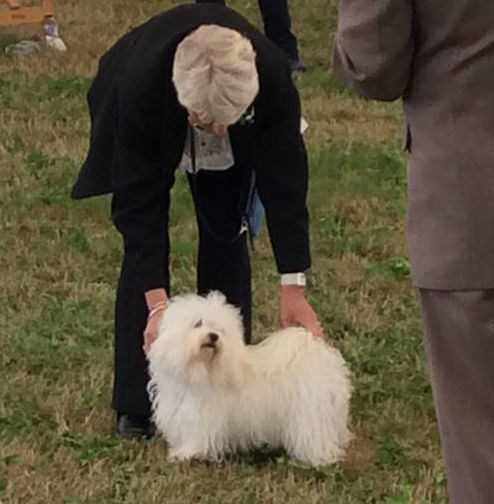 Unfortunately Bournemouth show clashed with The World Show in Holland and this must have affected entries right across the breeds. 3 Bolognese exhibitors went to Bournemouth and the weather could of been better as the hot spell broke and the rains came! Hilary McArdel and Chris Thatcher won their classes and Gonni Torre Delle Passere With Devonia was both BP & BOB. BOS went to Hilary McArdel’s Gerry Maty Ve Maria At Phendelle. Mr R McLeod was the judge on the day. 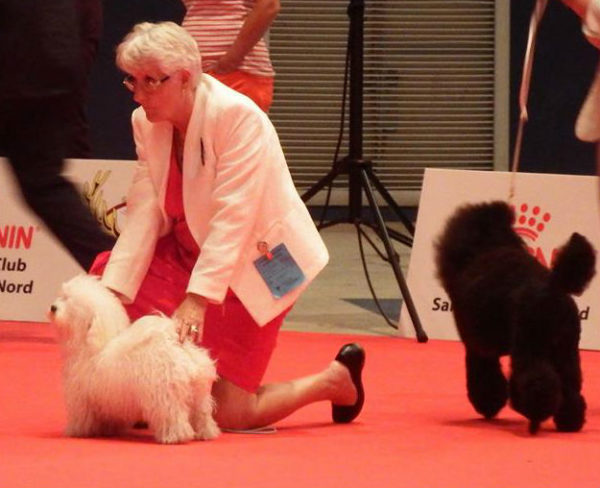 Over the weekend of the 15th of July Chris Thatcher and her daughter had a lovely weekend at a dog show in France. Chris said, “The weather was glorious. We took Rosa and Gonni to the show, Gonni received 1st and an Excellent in Junior and a lovely critique and Rosa an Excellent was awarded the CACIB, CACS and BOB”. Chris added, “it was a lovely venue right on the seafront at Dunkerque. Dunkerque was a lovely place, restaurants were very dog friendly and the weather was brilliant”.

Carol Lees contacted me and she was over the moon that Lafford Milky Bar Kid a dog she bred and that she co-owns with Kristy Leest went BOB at Dog Show de Baronie in Hilburg inThe Netherlands on the 10th of June. The judge was Rony Doedijns, NL. We can now report that this dog also was BOB at the first show in conjunction with The World Show in Amsterdam The Benelux Show. Great results for Carol & Kirsty! 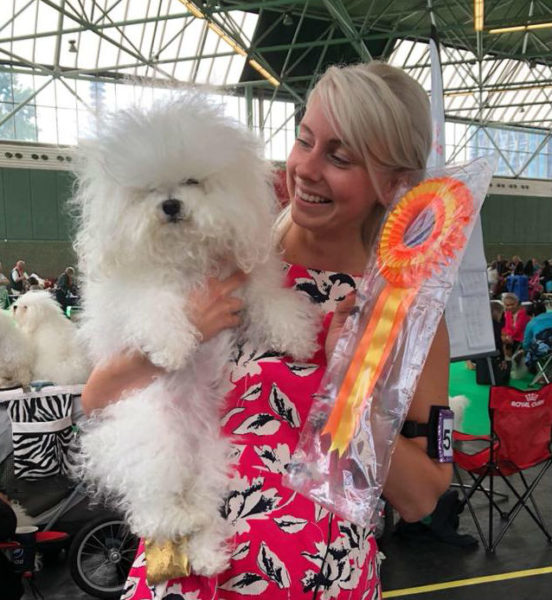 Three exhibitors made the journey to Amsterdam for The World Show and there have been lovely pictures and videos taken over the 3 shows. At the main show our judge was Francesco Cochetti. Jane Towers came away with BP, Donocielo Marcello won JD, Little White Wonder Othello Matteo was 2nd in the Champion Class. The Open Bitch class was made up of just British dogs with Clynymona Jo I’m Alone winning the class.

We have 2 nice reports from Amsterdam, click links to read reports from Virginia Dowty & Jane Towers. Thanks guys for sharing the experiences with those who probably would of loved to be there, but couldn’t manage it!

OPEN SHOWS
On the 15th of July the Mulligans had a fabulous but very hot day at Kingston Canine Society Open Show. They reported that it was a lovely setting with very nice company. Bolognese had classes for the first time at this show in Ardingly, hopefully more people will be able to support the show next year. Donocielo Seraphina was  second in Open AV Rare Breeds and Donocielo Ceasario BOB Bolognese. The judges were Yvonne Donnellan (Gardenstone/Vonicci) and Pia Dempsey (Tubberburr).

Karen Golden reported on Harrogate & District Open Show on the 14th July where her little girl Kaylo Van Het Balgzand was BOB in AVNSC in a tough group. Judge John Pernell made some smashing comments.

What’s coming up
In the next report we will cover Welsh Kennel Club Championship show where our judge is Mr E Engh  from Norway and we have 14 dogs entered and also City Of Birmingham where The British Bolognese Club is also having an OPEN SHOW and Richmond where our judge is Harry Tast  from Finland.