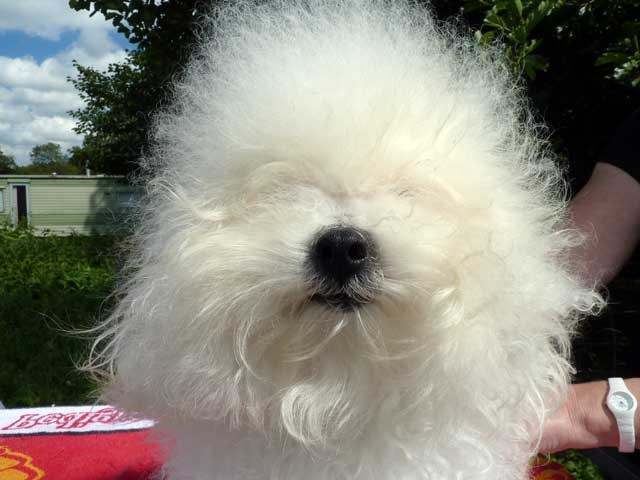 On a very cold but crisp New Year’s Eve back in 2007 I had the pleasure of spending New Year’s Eve at the Vets. I was expecting a litter of puppies from Sara with Devonia (Sara) and Quirino with Devonia (Quirino). This was my third and final litter from both Sara and Quirino who I had imported from Alberto Veronesi in Italy. Both the parents had been successful in the show ring and  from the two previous litters I had had two successful show dogs. My daughter had Leo from the first litter and I had kept Bella from my second litter. Anyhow, Sara unfortunately had to have a Cesarean Section but had two male puppies. We took them home and nursed Sara back to health but unfortunately, after eight days we lost one of the puppies. I had previously promised a male puppy to a lady in America so we gave the remaining male puppy the name of Morse. We thought the name quintessentially English so hence his kennel name Devonia’s Altivita. Altivita being Endeavour in Italian.

Morse grew and because he was a single puppy had lots of extra love and attention. However, just before Crufts 2008 he went lame on his front leg so we took him to the vets where he had x-rays and scans but unfortunately, they could find nothing wrong. A couple of days later he developed lots of pustules around his face and at the back of his neck. Back to the vets again for more tests. He was so poorly he was nursed 24/7. My daughter Vikki and I went to Crufts leaving Morse with my Husband and we both thought we would not see him again as he was so poorly. However, the vet managed to find out what was wrong and we were told that he had ‘Puppy Strangles’. Something that I had never heard of. It was treatable but would take a long time with Antibiotics and Steroids for months. Morse also lost every ounce of pigmentation around his eyes and his nose. Below is a photograph of Morse at 8 weeks.

To cut a long story short, he survived but I had previously decided that he was going nowhere, especially as far as America. It would not have been fair to send a puppy that had not been well.

Morse progressed well, but because of the Steroids could not have his first inoculation until he was nearly six months old so socialising him was a problem because he could not go out in public as the risk of infection was too great.

Eventually after Morse had his full course of immunisation we could finally take him out. He went to ringcraft classes for training and socialisation and eventually we took him to a show.

I thoroughly enjoyed showing Morse, he was a very biddable character and always gave me his best although he could be rather naughty in the ring sometimes if the mood took him. Over his show career he had 7 Best of Breeds, 13 Best Dog in Breed, 11 Reserve Best Dog in Breed. One of his Best Dog in Breed was at Crufts 2010, to say I was proud of him was an understatement.   He was also Top Dog 2010 an accolade I am immensely proud of. He was also taken abroad on a few occasions where he received a C.A.C.I.B and C.A.C.S and graded excellent at each show. Morse was also Patella clear and tested eye clear.

Morse sired a few litters (after checking with three separate vets that Puppy Strangles was not hereditary). I have two of his progeny here which I have been showing. Rosa (Devonia’s Red Hot Summer) who has had some success in the show ring and a couple of Best of Breeds at Championship shows and Monty (Devonia’s Montecristo).

Morse is now 10 years of age and is enjoying his retirement to the full. He now lives with my daughter Vikki and 2 Keeshonds.  He is still very active and enjoys daily walks, especially during the summer when he loves nothing more than bounding around through the woods and fields. Who would have thought given his early start he would be so spritely in his retirement. Morse can often be seen around the show ring as he goes along as a spectator dog.