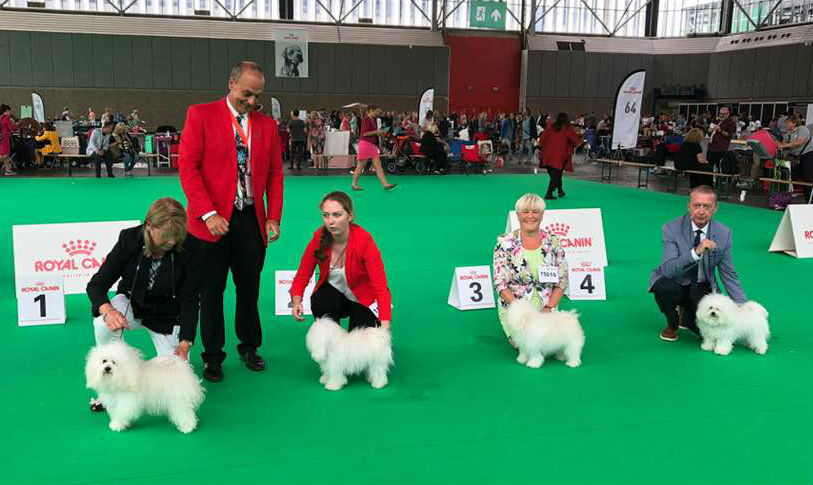 The Bolognese Brits had a great week in Amsterdam at the 3 shows.

Benelux, Speciality and World Show. There was a lot of walking I reckon over the week we must have clocked up many miles! It really is a hard call for us Brits because almost all the dogs being shown were heavily trimmed in spite of the fact the FCI breed standard calls for dogs to be untrimmed, it seems our European friends take no notice of this.  Trimming does make a huge difference, as staining can be covered up and dogs can be shaped to disguise faults. Some of the dogs from behind looked almost like Bichons. Having said that presentation overall was of a high standard.

At the Speciality Show the next day where double CAC’s were on offer, the judge was Aida Franco Riviera from Columbia. Now some folk would wonder why on earth a Colombian judge would know about judging Bolognese, but these very well know and highly experienced FCI judges having judging appointments all year round at International Shows across the globe and many of them probably see and judge more Bolognese than any of their British counterparts. BOB, CAC was Clynymona Jo I’m Alone, BOS, CAC Ch Harvey White Lion Vom Hof Dominique, Res CAC’s to Lafford Milky Bar Kid & Junior Bitch winner Clarchien Rock With You. The Best Junior was Donocielo Marcello, and Little White Wonder Othello Matteo 2nd in Ch Dog.

We all came away from the week, feeling justly proud that ALL our British dogs not just the winners, can hold their own in Europe and with 2 new Champions and 2 titles, Dutch Ch and Benelux Winner Nederland 2018 Clynymona Jo I’m Alone and Junior Dutch Ch and Benelux Jeugdwinner 2018 Clarchien Rock With You.

One thought on “WORLD SHOW Report, by Virginia Dowty”