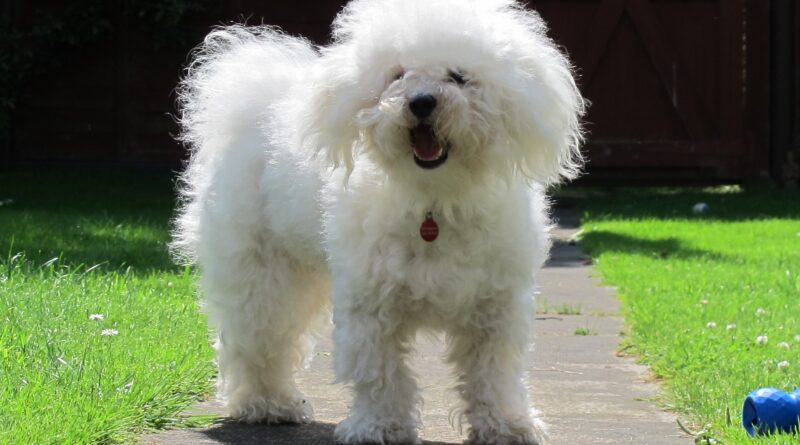 We came across Luca when he was 6 months old. Our previous dog Archie, a Miniature Schnauzer, had just passed away after a car accident but we knew we wanted another dog. We had never heard of the Bolognese breed before and knew nothing about them. However, we saw a photo of one for sale online, thought he was beautiful and went the next day to collect him.

He was such a happy little chap but had never been on a lead before and was a little afraid of children. My husband Richard took his daughters to see him and he made such an impression as he was so happy and playful that they brought him home. We collectively chose the name Luca as he was an Italian breed and one of my husband’s favourite films is The Godfather, a main character of which is Luca Brasi. However, he isn’t anything like the Luca in the film thank goodness.

We soon found out he likes his food. He is never more than 1 foot away when food is around. He doesn’t steal, but is there waiting for anything to drop. Which is probably why he loves me cooking or baking, he’s constantly waiting at my feet for the next morsel. He loves our grandson coming to visit and he knows he will get bits of toast and other goodies dropped on the floor from the high chair.

We all soon bonded with him, although it was about four weeks before he got used to the lead. He now loves going out, on or off the lead. He is such a good boy and always comes back when we call him. About a year later we got another dog, a Poochon, who we named Leo. They are very close, and have never been separated apart from visits for one of them to the vet. The other one eagerly awaits their return. 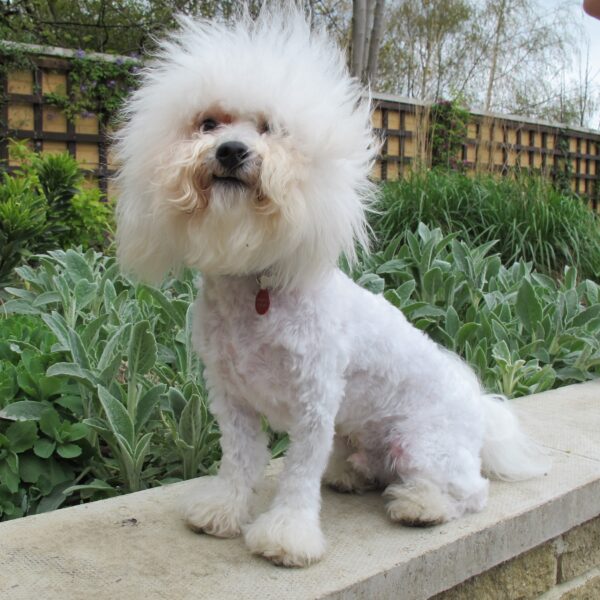 We’ve had some funny incidents with Luca. My husband once took him to the groomers and brought him home looking more like a Chinese Crested dog than a Bolognese. I was not impressed but thankfully his hair grew out and I soon had my Luca back the way he should be. 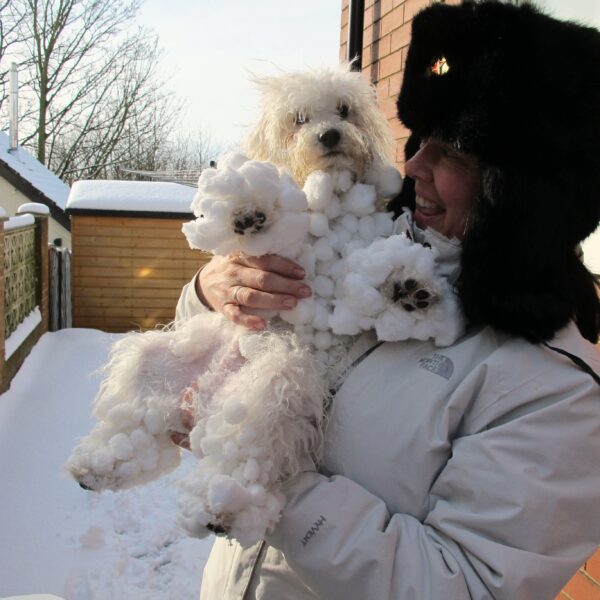 I once took him out in the snow when he was about a year old and he came back full of snow balls stuck on his legs. He is the best guard dog ever. It only takes a leaf to blow past the house and he knows and will let us know too. We have a cat flap that he uses to go out into the garden when he likes, but when we let his hair grow long, he struggles to get through and we ended up getting a bigger one so he doesn’t get stuck.

When he was young, one of his favourite things was getting a toilet roll to chew. He would take it under our bed and left us with a pile of shredded toilet roll to clean up. He enjoyed himself though.

Every year we do a Christmas card featuring our dogs. The first one was Luca on his own and since Leo arrived, we have a double act.

In the photo with Leo, they are wearing woollen coats knitted by my sister-in-law. We have to bribe them with hot dog sausages to get them to stay still.

I’ve fallen in love with the breed. They are such faithful companions with beautiful faces and highly intelligent. We go to Crufts each year specially to see the Bolognese. We rarely come across one in the wild and in nine years we’ve only ever seen two, one of which was in Italy. I think I will always have a Bolo in my life.