It took over two and a half years to finally let go of the sad memory of my handsome Bichon Frise Louis XIV and decide to adopt a new puppy, albeit a different breed. I researched the Bolognese and had lengthy telephone discussions particularly one with a joint breeder of Bichon Frise and Bolognese to make comparisons. I looked up reputable breeders with the Kennel Club and the Bolognese Dog Club UK and tirelessly emailing breeders and Bolognese owners and finally found Hilary McArdell of Phendelle Angelica Rose – who said ‘I have one boy left’.

There was an immediate mutual bond with Auntie Hilary. We met Luigi’s mum and dad and finally collected him on Sunday the 16th of August 2020. I would like to share my first 7 days from my collecting Luigi.

Day 1
Myself and Luigi’s Auntie (my sister Jeanette) excitedly, but somewhat nervously drove to Berkshire to collect Luigi. He was the last of his siblings to leave his mother’s nest. I had everything for the drive home, the harness, puppy carrier bag, a poop bag, water, towel, toys, even a car seat. Although, I cradled him in my arms and had no intention of letting go of him until we got home. I remember Auntie Hilary the breeder’s last words, ‘You are now his mum and he will come into his own within three weeks.’

The first day was nerve wracking. Luigi was introduced to the house and the back garden. I had forgotten how overwhelming it can be to adopt a new life and a puppy and learning Luigi‘s psyche. I had to teach him the bathroom etiquette, as to when, and where is his potty time and area and what is the general housebreaking rules. Teaching him what he can play with, when to eat, and how to behave with guests or visitors. Sometimes I think Luigi was really teaching me.

The first night was interesting. I had got a bed in advance beside my bed and lay his blanket in it. I carried Luigi to his bed that night and to my relief, he immediately snuggled up and laid to rest. Throughout the night I set my alarm on a bi-hourly timer and I carried him out the back garden to relieve himself. However, I did have puppy pads outside my bedroom (with the bedroom door open) in case of indoor accidents. When he went potty outside in the garden, I would yell ‘Yeah…go potty’, to let him know that all was good.

Day 2
The warm August days assisted regular outside ‘go potty ‘ times and lots of outside play. Luigi chewed on everything, from a brick, to bark from a tree, to a table leg or the foot of the chair. I would keenly give him a piece of marrowbone, or a chew stick, or a doggy toy or rope, to chew on. He would also take any opportunity to grab hands or fingers. His teething was clearly an issue.

Day 3
I began to discover puddles on the floor. I would say ‘No’ and look unhappily into his slightly misty ebony puppy eyes and take him outside or to the puppy pad, if it was raining. This would hopefully be seen by Luigi as a clear indicator of what is the correct behaviour. Is this positive affirmation? I do hope so! Rewards are earned. So, when Luigi went potty outside, he would be rewarded by excited claps and milk treat. Night time rapidly became routine. When preparing for bed, play time would be between 8 and 9 pm, then out the back garden to ‘go potty’. Then I would groom Luigi and carry him up to his bed.

He struggled (and still does) with drinking water from his bowl. He dunks his head in the water bowl and blows bubbles, as if drowning himself. All my grooming would go to ruin with his face soaked. I do hope he will grow out of this!

Day 4
Luigi often returned to the same place in the house far from his potty pads to urinate. So, accidents inside, were promptly cleaned with white vinegar. If I caught him about to ‘go potty’– I would quickly carry him to his pee pad or outside. He would be so fast if he decided to ‘go poo’ inside the house, which would be frustratingly far from his pee pad. But occasionally Luigi would poo right near his food, which I understood was something dogs did not do instinctively.

Day 5
A lot of worry and uncertainty. Lots of questions on WhatsApp‘s to Auntie Hilary. How much food should he get at a time? How frequently to be fed? What treats to give? What to use for itching? What to give for worming? But nothing prepared me for the shock that I bestowed that afternoon. I went into panic mode and began to doubt myself as a mother. The only explanation of my addled mind was that I had already failed miserably as a mum. Why? I had taken my eyes off my Luigi for less than a minute, and he started screaming and yelping as he ran past me towards the house. Had he broken a leg, poked his eye, scratched himself, been stung by a wasp, would I have to run him down to emergency? I was jumping off an emotional cliff as Luigi continuously yelped and cried. I was overwrought, pessimistic. Can I do this? Was it too soon from losing my Bichon Frise to get a new puppy and a very different breed? But I recall the calming guidance from Auntie Hilary that day, as I recount the absurdity of my emotional turmoil with a smile of contentment. Hilary did say that he acts as if he is big and tough, but he is really a softy.

Day 6
Grooming Luigi is a challenge. He grabs the brush, the comb, the cotton pads, my fingers, anything that goes near him. I even sent a video clip to Hilary. Her advice was to hold him firmly under my arm, and use a small sheet of toilet tissue around my finger to dab in the corner of his eyes. Give constant praise and reassurance, but be persistent in this routine, until he begins to relax more and let me work without snapping my finger off. I am almost now at the point of playing with him as I apply the tear stain remover gently. However, he is not yet happy to let me trim his fringe. I am sure that if I put in the stylish hair clips that I have bought for him, he would somehow do a Houdini and eat them. Better wait! I know that this time will pass by very quickly when he will no longer be a puppy.

Day 7
It has become apparent that Luigi’s character is the antithesis of my previous Bichon Frise as a puppy. But I see it as a new and exciting challenge, which I am embracing especially at this grim global pandemic age. I relish the extra time on our walks, given the lockdown measures, for all the attention Luigi gets whilst walking. It’s really comforting to see Luigi bring a smile from passers-by. He makes my every day and it pleases me to know that he makes everyone else’s day. Grateful for Bollies! Grateful for Luigi! 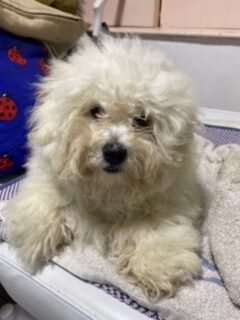 The breeder Hilary – Auntie Hilary
As said earlier, there was an immediate bond with the breeder. I went to meet Luigi when he was six weeks old. From then, I was in an emotional turmoil, with my micromanaging paranoia. I constantly worried what Luigi was doing, eating, playing, sleeping. There were daily requests for photos and video clips of Luigi. The relief and excitement of finding my Luigi turned into a constant pressure for a blow by blow account of Luigi. I just couldn’t relax.

The surrogate
I had said to Hilary that I wouldn’t be able to do what she did, by being a type of surrogate. Handing over her puppy to a complete stranger, not allowing herself any long-term emotions. How could she afford herself the heartbreak every time she let one of her puppies go?  I feel spectacular that Hilary trusted me with one of her puppies and I respect what she does. I feel admiration that she (as with all reputable breeders) do this selfless act by giving people, like me, a new love in their life, a new meaning and a new reason to survive! 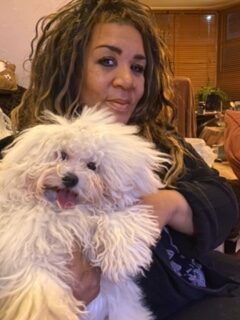 This is an up to date picture of Luigi’s Auntie Jean-Jean (my sister) and my lovely boy.