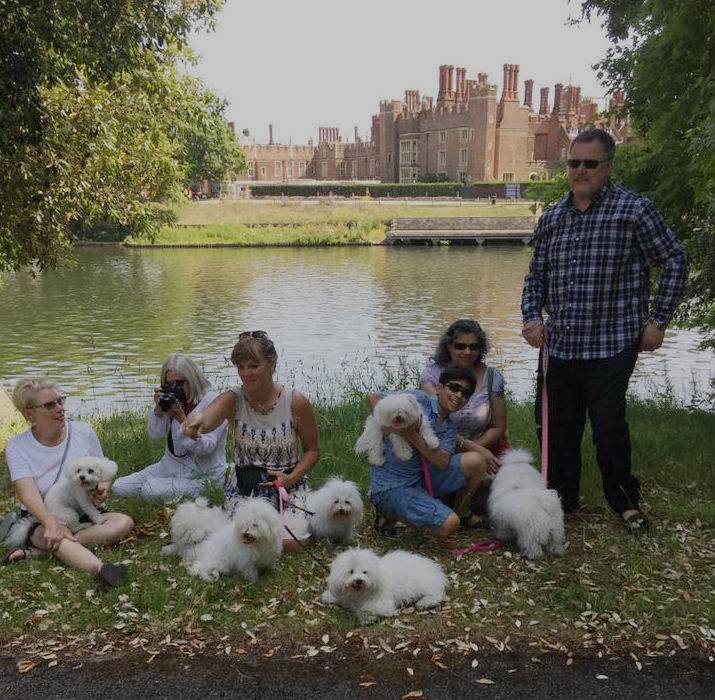 We knew the weather was going to be very hot today, so we slightly changed our plans to keep the dogs in the shade as much as possible. Deana and Melanie met Paul Irvine and his wife Neelu and son Khushie, along with Carol & Gary Martin in Hampton Court Station car park as planned. Teresa Strzepkais had problems with the trains, so we met up with her about an hour later. Sadly Margaret Prior was poorly, but hopefully we will meet them and their Bolognese Polo next time. Polly and her maltese Alfie Boo came up from Bognor too to join in the fun. Teresa is from Poland and she brought her dog Pusio with her when she moved to the UK. Although a pet dog Pusio was in fabulous coat. Paul brought his new puppy Minnie and Gianna. Minnie was very confident for a youngster and was not fazed by the hussle and bussle of the area.

We then walked down by the river with the lovely views of Hampton Court in the background and the boats going by it was picturesque to say the least. There were some lovely old trees there too and quite a few friendly fishermen. Everybody we met were just so nice, even the fishermen got their camera phones out.

Just before midday we moved to the nearby pub where they had allocated an area for us. It took a while for the dogs to settle down, but it was OK in the end. The landlady said they enjoyed having us and that we must go again, so it looks like think we got away with it. After lunch Marion the landlady judged the prettiest bitch (won by Pandora), handsomest dog (won by Fabio) and waggiest tail (won by Alfie). We also raffled one of the Bolognese Crufts mugs along with a few extras (won by Paul Irvine) and had a Lucky Dip, we raised a few pounds for the club funds. The Albion Hotel is very dog friendly, offering a dog’s dinner of chicken breast and a few dog biscuits for £2, several Bolognese really enjoyed that!

It was lovely to meet more club members, well done Deana Mee for organising the day and we look forward to the next MEET UP which is a picnic in Hotham Park in July.