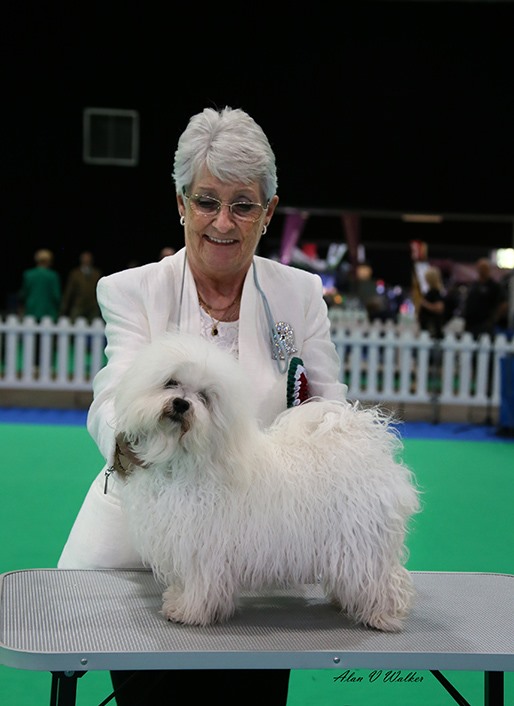 I have had dogs for most of my life. My parents had a Manchester Terrier cross when I was two and she was around until I was 18 so I grew up having learnt how to respect and take care of a pet. After getting married and eventually getting a house with a garden I had various rescue dogs the last rescue being a Pomeranian with three legs!  My journey of showing dogs started way back in 1986 when I decided that I would like to have a go at dog showing bearing in mind, I had never even been to a proper dog show before. I purchased a pedigree Pomeranian through Exchange and Mart Newspaper (not the correct way to source a dog) and brought home an 8-week-old puppy. I started ring craft training classes where I was pointed in the right direction to enter a show. I was so nervous I did a few Exemption Shows with a friend who was also a total novice and we found we enjoyed it. Then moved on to a couple of Open Shows and then came the first Championship Show. I had entered a very young dog in Limit class as I really had no clue as to what class to put her in and much to my surprise I had a first which also gave me a stud book number which qualified my little girl for Crufts for life. My journey into showing started that day. My daughter also had lots of fun doing Junior Handling with the same Pomeranian.

Change of Breed
A few years later I ventured into Bedlington Terriers. What amazing dogs they are, even though they are terriers they are incredibly quiet and not very terrier like. I had fun showing a couple of females for many years. The only downside to showing Bedlingtons is the grooming, or should I say, clipping, trimming, and sculpting. It would take me hours and hours to get one ready for the show ring. I would turn up at a show only to be told the ‘head’ was not quite right. This was how I came to look at showing a dog that was easier on the grooming!

In the year 2000 I researched three breeds, the Havanese, the Coton De Tulear and the Bolognese. I finally decided on the Bolognese. The next quest back then was to find a breeder as Bolognese were a rare breed on the Import Register. There was also only about 600 dogs in the UK. I located a breeder in Gloucester which for me was only an hour away, so I was lucky. I went to see the breeder, Gina and Martin Taylor, of the Fabio affix who agreed to let me have a puppy. Gina and Martin became great friends in time and were also my mentors in the breed. Bailey was my first Bolognese and I showed him from the age of six month, at the time on the Import register which meant there were no Best of Breeds etc., There was talk of the Bolognese coming off the Import Register which happened in July 2001. I remember the first Championship Show which gave us breed classes was Paignton & District Fanciers Association. I cannot remember how many dogs were entered but we were a small and happy band of exhibitors. The first time we had classes at Crufts was in 2002 with an entry of 17 dogs. The Bolognese were an assortment of sizes and many had a champagne shading. The Best of Breed had come in from Italy and I was impressed. I spoke to the breeder one Alberto Veronesi who gave me lots of information and tips on grooming. I had also won my Junior class so my journey into Bolognese was firmly set.

Importing Bolognese
In 2003 I made my first ever trip abroad to Italy to collect a female Bolognese called Sara. What a long drive it was. Back then, before the modern Pet Passport you had to drive from the place of origin back to the UK within 24 hours, so it was a non-stop drive of over 16 hours just to make sure we were back in the allotted time. The following year saw another trip to Italy to collect a male called Quirino both of these dogs came from Alberto Veronesi and at the time were great ambassadors for the breed, they were a lot smaller and certainly more square than what was being shown in the UK at the time. These two were my foundation stock and a few ‘Devonia’ show dogs were born. My two favourite dogs from Sara and Quirino were Devonia’s Altivita from my second litter and Devonia’s La Vita e’ Bella from my 3rd and last litter.   Morse and Bella.   Both these two dogs were incredible show dogs. Morse had Best Dog in breed at Crufts 2010 and Bella had best Bitch in breed at Crufts in 2011. My one regret is that unfortunately, I never bred a litter from Bella. I had a couple more trips to import show dogs which has taken me through to the present time. I still have four Bolognese all kept in full coat but recently the show scene has taken a back seat.

I have judged the breed twice at Championship Shows but decided that I would rather show than judge. The breed has changed somewhat over the years. I thought as time went on the breed would become more uniform but there is still a variation in size, not all are square, some, as far as I am concerned are too fine boned, Bolognese are supposed to be sturdy and square and with great beauty and character in head and expression. Many now have noticeably short faces. A great difference from my first dogs way back in the day.

2 thoughts on “How I became involved with the Bolognese Breed, by Chris Thatcher”