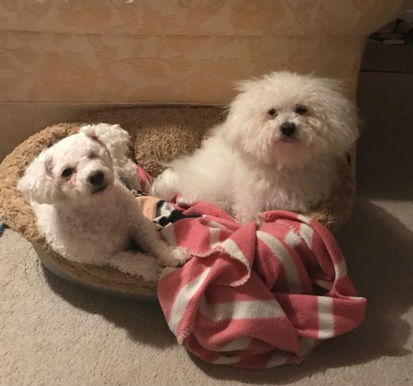 CLICK HERE to read the first part of Daisy’s story

Daisy went to the groomers a month ago and had to have her fur cut short due to it being matted right down to her skin. She was a good girl whilst having it done and sat well for it. When I picked her up her fur was short but it kind of suited her – she looked like a little lamb.

I have bought her a coat for walks which is exactly the same as Ruperts so they look like twins when they go out. She also has a jumper and a blue body warmer. I’m not one for dressing up dogs with clothes but I felt it was a necessity for Daisy in these cold winter months. She’s not really a fan of the coat herself and seems to walk slower when she has it on but it certainly does a great job of keeping her warm.

Daisy’s eye wound has nearly healed right up now and her fur is growing back over it to cover the scar. She has adapted well to only being able to see with one eye. At first she would bump into things but now she manages well although she does bump in to Rupert at times when they are out walking on the lead together as they try to get ahead of each other – each one wants to lead and win the race! 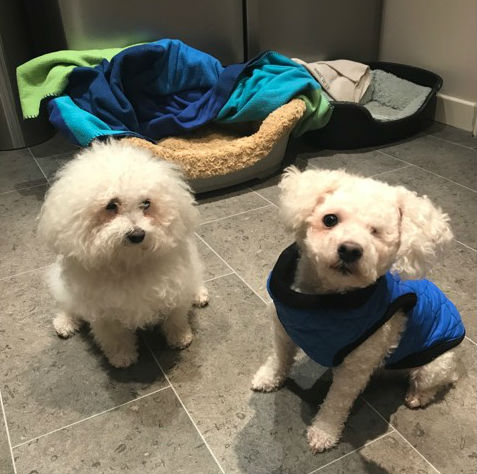 Since she has had her new haircut she has been back to the vets for a check up on her eye and all the vets and the nurses there came out to admire her new look as they had only seen her when she was ill with her bad eye and with a dreadfully matted coat. They all admired her and said she looked like a completely different dog to the poor matted mess that had come in just before Christmas. I’ve also taken her back to see the people at the kennels and they said the same. They could not believe how wonderful and happy she was looking.

Rupert is continuing to build doggie friendships with her and he tolerates her pinching his bed instead of sitting in hers, budging him out too the way to eat from his his food bowl when she has finished hers and pinching his place on the top of the sofa. They have even shared a bed once so far so it’s all good between them and they walk up the road in total harmony together now. She has a made a real attachment to me and follows me everywhere.

When I come home from work she goes crazy for her food and a walk as does Rupert so I have four furry frenzied legs jumping up at me for attention which is wonderful. Daisy is still quite timid around strangers and will always look to me for comfort and reassurance. However, her confidence is growing all the time. When I first got her she would only go outside in the back garden to do her toileting. She has just started to come out in the garden to look around. I thought it was due to the cold that she does not really like to come outside but when I think about it it may be because she was found outside by the dog warden and no one really knows how long she had been there for.

Daisy is turning out to be a great character who barks at me to get my attention and is a real lap dog as she jumps on my lap as soon as I sit down. Rupert has never been a lap dog and will jump off my lap as soon as I put him there and would rather sit next to me so this works out well as my lap isn’t big enough to have two furry bolos!