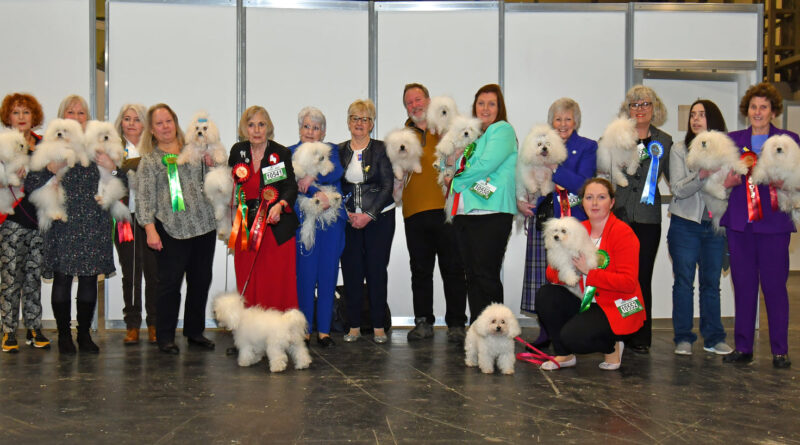 Even though Bolognese numbers were low for 2022 Crufts compared to previous years, our breed did have a particularly great day! Rare breeds Bolognese and Coton De Tulear were shortlisted in the Toy Group under Mr A Easdon, both for the first time. Our BOB Kaylo Van Het Balgzand ShCM (Lucie) chosen by breed judge Adele Summers and owned and shown by Karen Golden is now the first Bolognese to win BOB at Crufts twice (2018 and now 2022) and the first Bolognese to ever be short listed in the Crufts Toy Group. Lucie was bred by Carolien Jongejans in The Netherlands. Karen said, “It was so exciting for the rare breeds with both a Bolognese and a Coton De Tulear being shortlisted in the group and enjoying the recognition they so deserve. Let’s hope that more people will join us in owning and showing these rare breeds as both are so beautiful.”

It was great to be back at Crufts after last years show had to be cancelled due to COVID. As exhibitors, we had a leisurely start and sensible finish this year, for a change. We were scheduled after Coton De Tulears and they had a late start. We had plenty of space and wide benches and we were right near to refreshments and not far from all facilities. As usual the NEC looked after us well, parking and access was easy and the weather was dry, which is a bonus. We were finished about 3pm, but couldn’t leave the show till 4. There were long queues to leave the NEC at 4!

All the UK Bolognese exhibitors who have shown since lock down eased managed to get to Crufts, so it was a full house. Unusually though, there was only one dog showing from abroad at Crufts this year, Italian Ch Radamantino Dante, owned by Miss ML Friggi and handled by professional handler Salvo Foti. Dante was awarded BOB at Crufts in 2019, but failed to win his class in 2022. I suspect that numbers were down due to the lack of overseas exhibitors and being without Virginia Dowty who used to bring quite a few dogs to Crufts!

Our club Secretary Chris Thatcher has many years experience of Crufts saying, “This would have been my 35th Crufts if it wasn’t for COVID but I can say it was my 34th. A show that has changed immensely over the years from a fairly small venue at Earls Court to the massive venue of the NEC. I do feel that over the years it has become more of a trade show than a dog show. I fancy this year, there were not as many visitors as it seemed a lot easier to get around. It is great to catch up with lots of people from different breeds and to discuss the breed with the general public. Lovely to see a previous exhibitor of Bolognese who was in the breed when I had my first Bolognese. Her comment to me was that each year she visits there are less and less people she remembers and this year, I was the only one!”

Bette Hopkins, a Bolognese Dog Club Pro Member, won Best Good Citizen with her girl Enjanicka Toscana Ti Adoro. Bette said it was a thrill to compete at Crufts, adding “Even after thirteen years of showing, the excitement never goes away when you step out onto the huge green arena, and for a moment you think you and your dog are the only ones there. This year with two dogs to show I was very pleased they each won their class and got the much coveted Crufts red rosette. We also took home a third rosette for Good Citizen Bitch in Breed. Showing has its ups and downs and also its heartbreaks, but mostly it is challenging and rewarding.”

It was interesting to see family connections amongst Bolognese competing at Crufts 2022. Besides brother and sister relationships and many half brothers & sisters, Donocielo Michelangelo (Meko) Best Dog is the son of Donocielo Seraphina Best Veteran, both dogs being owned by Dennis & Carol Mulligan. Judge Adele Summers awarded Best Dog to Donocielo Michelangelo from the Junior Class, which is a high accolade for a dog of just 12-months. Best Puppy went to Lyckalotte Enzo Ferrari at Arkadian, owned by Mark & Diane Whateley. Enzo is a high spirited puppy, with great personality.

Pro Members Carol & Dennis Mulligan were happy to share their Crufts 2022 experience, “After two years away from the famous green carpet the day had finally arrived for us to set off on our journey from the Isle of Wight. We arrived in Birmingham on Friday afternoon to heavy rain – just what you don’t want with clean white dogs! After their first toilet break in the hotel gardens it was evident that we would be spending that evening bathing the dogs again, this time in the hotel room shower! Finally, on the magic day, we set off to the NEC and arrived at the ringside bright and early. The look of the show was slightly different, less trade stands and lots of empty space. Our fellow exhibitors started arriving and we all got down to preparing the dogs in preparation for that famous ring circle walk and judging by well known Adele Summers. We were proud of all our team who we felt performed to their best ability. Our highlight was little 12-month old Meko who was awarded Best Dog and BOS. Quite an achievement for such a young age. This was followed by his mum Seraphina winning Best Veteran. We arrived back in the Isle of Wight on Sunday evening, shattered but feeling very happy. Roll on Crufts 2023 when we do it all over again!”

The show did seem quiet compared to previous years with less visitors and members of the public around the benches. Amy Lovell spent time with us on the stands and has subsequently joined our club in preparation for her new Bolognese puppy. Club member Libby Hough has 2 Bolognese at home, she introduced herself and stayed to watch the Bolognese judging. It was great to see Beth Symmons & Jim Hogg who are both committee members at their first Crufts. We are pleased to report that Jim has just become the Honorary Treasurer for the Bolognese Dog Club UK. Hilary and Peter McArdle came by to catch up with friends and support the breed, although they haven’t got back into showing yet since lock down. Heather and Bill Blakeway, who used to show Bolognese popped by the Bolognese benches after they had finished showing their Pekingese. Crufts more than any other show, is always a good opportunity to see old friends and meet new ones.

Pro members Diane & Mark Whateley, winner of Best Puppy, said, “The Arkadian team thoroughly enjoyed their day on the Discover Dogs stand helping to spread awareness of the breed. On show day, it was a real joy to meet fellow Bolognese enthusiasts and their gorgeous dogs. We were delighted that our excitable Enzo behaved himself long enough to be awarded Best Puppy and that our other two, Amy and Max, performed well in their classes. Congratulations to all the winners, especially Meko, Enzo’s half brother, for BOS and Lucie for breaking records with her 2nd Crufts BOB and getting shortlisted in the group. A Crufts to remember!”

After the judging, we managed to all get together for a group Photograph courtesy to our faithful photographer with the big lens Dennis Mulligan, although we couldn’t find Greta who had wandered off to the Maltese ring. I took pictures round the benches too which are posted on our Facebook Page. We always find when we publish Crufts pictures they prove really popular, attracting hundreds of views and lots of lovely comments.

I would like to thank those contributing to this report and hope you enjoyed reading about the Bolognese at Crufts. You can find the full results for crufts 2022 at www.fossedata.co.uk/show-results/crufts/