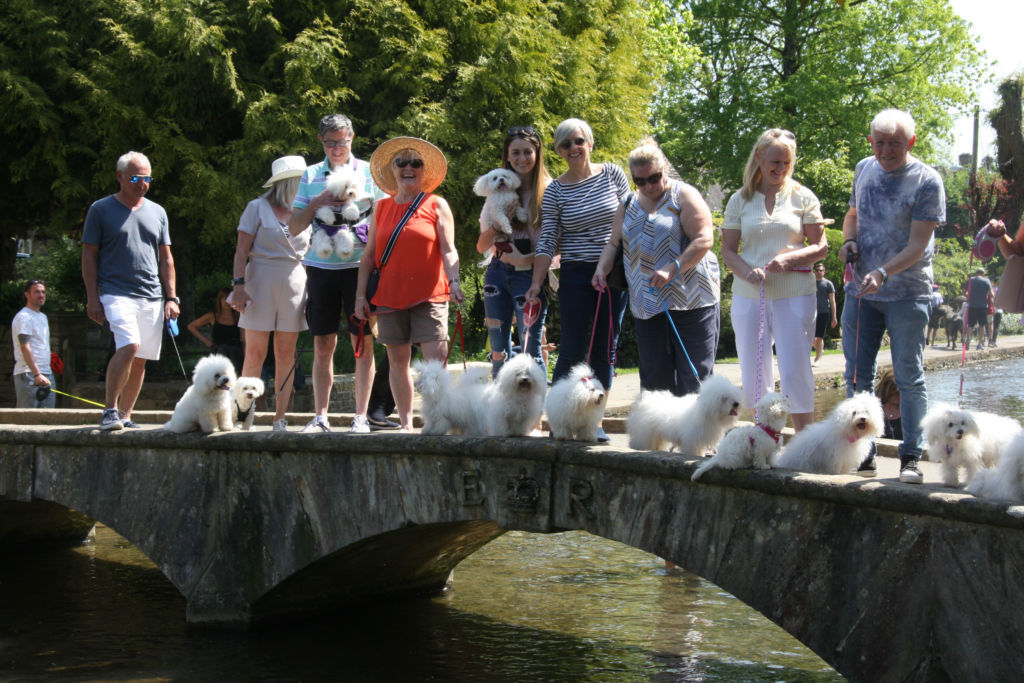 Bolognese met in Bourton on the Water in The Cotswolds on Sunday the 20th of May. The pub we met in was away from the crowds. At the back of the pub they had a terrace with shade by a brook, it was perfect. The pub reserved us tables outside for midday and we set off for a walk by the river. There were lots of tourists in the town, so we did not draw too much attention as it was busy. We stopped on a bridge for a fabulous photoshoot. The weather was lovely.

Back at the pub, most of us had the carvery and the food was great. The dogs were not too much trouble, it was better that we could be outside. There were Bolognese owners that had met each other before at last years Oxford meet up and there were quite a few new faces.

Diane & Stewart Morris are a lovely couple from Leeds who were also visiting relatives in the area. Their dog Pixie was celebrating her 3rd birthday and the owners had brought a lovely BIG cake for us to share and of course Happy Birthday was sung by all! 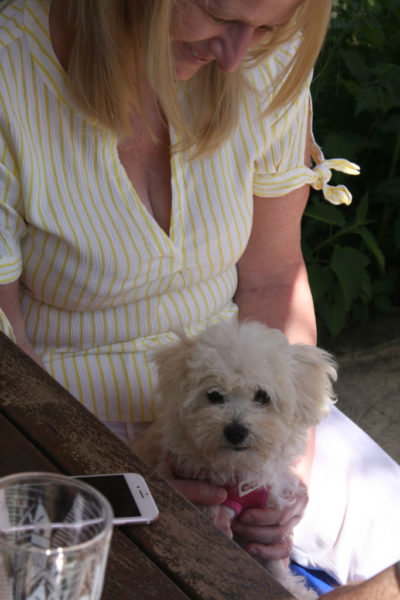 Puppy Trixie taking it all in

Suzzi & Andy Blair brought their 12-week old puppy Trixie who was amazingly confident, walking on the lead through the crowds and joining in like an oldtimer! Luci Leach and her husband where there with their lovely daughter and 9-year old Bolognese Daisy, who they actually bought in Hungary, took with them to the US and now are living in Surrey. Lottie brought little Jelly and gained some advice on training and behaviour. Co-organisers Jane Towers and Cindy Costello brought a number of Bolognese boys, girls and Jane’s 6-month old puppy Caro. Laura & Michael Eviston came from London with Rory, who had no difficulty joining in. Mark & Dianne Whateley, from The Midlands were chilling out with their 2 show Bolognese. There was a lovely variety of sizes, ages and coats. Polly from Bognor was there with Alphie a maltese cross, who is a regular at Bolognese Meetups. It was quite a family affair with Jane’s daughter bringing her 3-week old baby Henry James. We had 3 generations of Bolognese and 3 generations of Jane’s family as well!

After lunch we drew the raffle which was won by Suzzi & Andy. It was a hamper full of goodies including a treat ball, toys, treats, bowls, Bolognese greeting cards, a club bandana, writing paper and more! We also sold lucky dips and some club merchandise. Everybody got a gift from Jane. Jane made some comb cases which included a Bolognese Dog Club label and 2 were given away as prizes. Cindy donated soft girl and boy blankets and girl and boy luggage labels for the girl and boy winners. We raised £52 for club funds, thanks everybody. 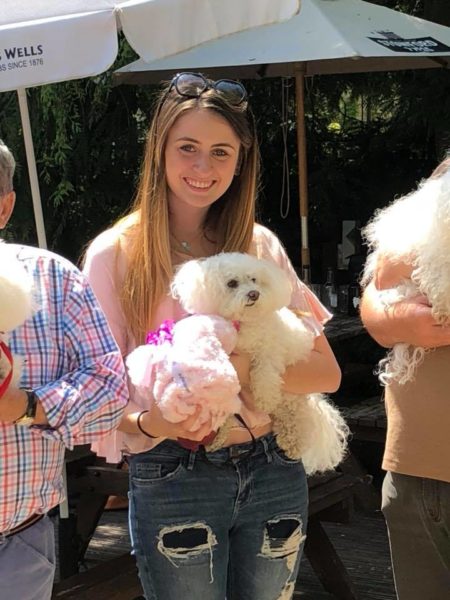 Hannah and her assistant from the pub then judged our fun competitions, Prettiest Bitch, Handsomest Dog, Waggiest Tail, Best Hair do and Best Trick. Cindy Costello donated some lovely prizes, so we were able to give first and second prizes and a prize for all the dogs that did a trick!

Most people had travelled quite a way to be with us, some had travelled a long way and stayed over. It is a most amazing part of the country and Bourton on the Water has to be seen to be believed. The club has had some lovely messages from people thanking us for a lovely day and saying how much they enjoyed meeting everybody and the dogs. A good time was had by all, let’s see if we can top that for the OXFORD meet up next year!

The next meet up is on the 24th of June in Greenwich Park LONDON. CLICK HERE for full details.