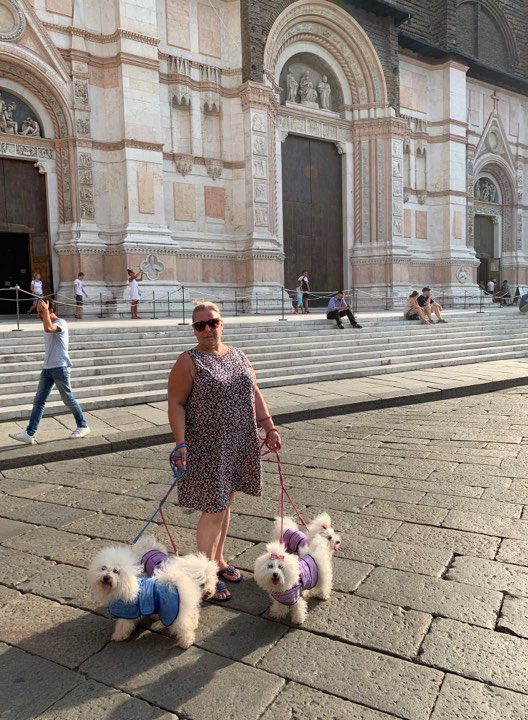 Here is the story of Mark & Diane Whateley’s summer 2019 trip to Bologna with their 4 Bolognese!

We set off with our humans from our home in Birmingham on the 10 July, little realising it would be the last time we saw our beloved garden for a couple of months. We had only been home for a few days as we had been over to compete in the dog show at Peterborough, so it was a bit of a shock to be back on the road so soon.

We were rudely dragged from our beds and all of us piled into the Land Rover to set off early. Dad drove us down to Folkestone and we caught The Shuttle over to France which was quite an experience for us but at least we stayed with Mom and Dad all the way to the other side. Dad had to turn the air conditioning on in the car and caravan to keep us cool and it has been on ever since.

Eventually, we all arrived at a nice place in Calais and Mom and Dad pitched our caravan by a dog walking field which was great as we didn’t have far to go to do our business and we could bark at all the other dogs when they went passed.This was probably the last time we saw proper lush green grass. We will be back there for a week at the end of our holidays.

The next day we travelled again to a site on the river near Dijon for another quick stopover. The river was beautiful at night and we had a walk along the bank in the relative cool before bedtime.

In the morning we got up early and set off for Provence. We were on a lovely site in the mountains above Nice on the Cote d’Azur. The site was in an old olive grove and the roads to the site were pretty scary and we nearly didn’t make it with all the narrow lanes and tight turns but got there in the end. The site owners had two dogs of their own and lots of cats but unfairly we weren’t allowed to chase any of them. Before bed, Dad took us for a walk and we managed to get all the local dogs barking for hours into the night. They were still going strong when we were dropping off to sleep in the caravan. Next day we went to Tourettes-sur-Loup which is a small medieval village perched on a rock in the mountains. There are lots of little back alleys to explore and we tried out our cool coats for the first time this holiday. Not surprisingly, we would practically have to live in them as it got a little bit hotter every day.

Heading For Italy
Next day we set off for Italy and following a long drive through the mountains we eventually arrived at Camping Yoghi and Bubu’s high in the Italian Maritime Alps. There were two Shi Tzu’s, two Beagles and a nice old dog of no particular breed who lived on the site all summer and were very friendly.

We had a great time exploring in the mountains and while we were there we visited Turin, which was a bit boring for us until we went for a walk in the palace garden and Mom got chatted up by a man from Palmerno. We also went to Mondovi, Pamperato and Genoa where we had dinner on the side of the marina. Lots of people gave us a fuss and took our picture and Dad says we have now been photographed more times than royalty. While we were at the marina we saw two dogs that looked very much like us without our full coats but it turned out they were Bichons, but they were both very nice.

Leaning Tower of Pisa
After a week in the mountains we headed South to Tuscany and stopped on a site near Poggibonsi which was very hot. The views from out of the car were amazing. On the 23 July we went to Pisa to see the leaning tower but it was very hot so we sat in the shade of a café with Dad and watched the horses pulling their carriages full of tourists while Mom went off to explore. The day after we went to Siena where we were recognised as Bolognese rather than Bichons or Maltese. We had trouble parking and had to go up 8 or 9 flights of stairs while Mom struggled up the escalator with both of our strollers. Again we had lots of people take our pictures and give us a lot of fuss.  It is clear that Italians love dogs very much, and we have seen loads of them on our travels.

Next day we went to Monteriggioni which is an ancient fortified village.  Dad walked up on the battlements but we weren’t allowed so had to stay with Mom at the cafe.  It was about this time that we decided to play a trick on Daddy and every time he threw away a poo bag, we took it in turns to do another one.

The Beach
The next day we went to the seaside at Viareggio which is full of art nouveau buildings, but we weren’t allowed on the beach so we walked in the shade or rode in our strollers and sat on cool pads. On the way back to the car we met a nice man working in one of the restaurants who recognised us as Bolognese and gave us loads of fuss.

We then spent two days in the beautiful city of Florence. We visited the Duomo, saw Michael Angelo’s David and walked over the Ponte Vecchio and mommy got her nails painted. We haven’t seen many Bolos on our travels but in a back-street café in Florence there were four in a dog basket on a push bike and we all greeted each other with some enthusiastic barking.

Ready for Bologna
On the 31st July we moved 20 miles North of Florence to stay on another camp site near Barbarino de Mugello. That night we were given a bath in preparation for our visit to Bologna the next day. We had a great time in Bologna and met lots of nice people including Patty Pozzi who lives in the City. She has a Bolognese of her own and is a member of the Bolognese dog fan club on Facebook. She took loads of pictures of us and showed Mom and Dad pictures of her own dog who is very cute. Bologna is a nice city with lots of old buildings and Max desecrated most of them with his constant scent marking. There are miles of colonnades built to house travellers and we spent some time walking in their shade, getting a fuss from tourists and looking in shop windows.

We stayed late and had an evening meal in Piazza Maggiore in front of the unfinished Basilica of San Pietro. After we went for another walk and saw the two leaning towers which are very different from the one in Pisa. Driving and parking in Bologna is quite difficult and our talking map thing got very confused at times, taking us round in circles almost as if it didn’t want us to leave.

I don’t think Bolos in buggies is a very common sight in Italy but it has kept us cool and safe so far and brought us all a great deal of attention. Hopefully we will visit Bologna again one day when the weather is a bit cooler.

(note all pictures are taken in Bologna)

One thought on “The Road to Bologna, by Bella, Cara, Amy & Max Whateley”