Sunday 22nd September saw the ‘Somerset Meet up’ of our Club. The weather forecast had been a yellow weather warning for heavy rain but we decided to go ahead despite this. We were so so lucky. On waking in the morning and looking out of the window it was heavy rain and I wondered whether I had made the right decision but with people coming from so far away it would have been unfair to suddenly cancel. It rained early in the day but by the time of the meet up it was just a drizzle.

We were a group of 19 people along with 16 dogs, 14 of which were Bolognese who traipsed into the café. We had a very enjoyable lunch socialising and mostly talking about the Bolognese. We had a lovely raffle which raised money for club funds. First prize went to our Treasurer Vera, second prize went to Tracy Rock and third prize to Beth Symonds. By the time we had had our leisurely lunch the sun had come out and we decided to go for an amble in the sunshine. 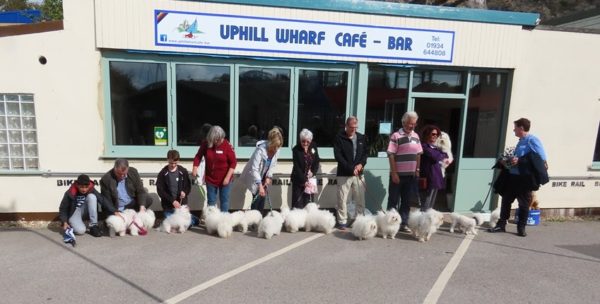 Prior to going for our walk we had three fun competitions and the owner of the café was really pleased to be asked for the fourth year running to judge them. The first competition was ‘Prettiest Bitch’ which was won by Anne and Steven Bell’s Izzie who had come all the way from Staffordshire. Most ‘Handsome Dog’ was won by Jude Pearson’s Rupert from Burnham on Sea and ‘Waggiest Tail’ was won by Morse who is nearly 12 and lives with our Health and Welfare Officer Vikki Marshall.

A list of members who attended were as follows:-   Anne and Steven Bell and their dog Izzie from Staffordshire, Beth and Jim with their dogs Lola and Izzie from Hertfordshire, Tracy and Nick with Archie and Marco from Worcester, Jude and Matt with Rupert and rescue dog Daisy from Burnham on Sea, Jan and Pete Hargood from Devon with their dog Milo, Paul Irvine and his Son with Gianna and Minnie from London, Caroline with Lucca from Burnham on Sea. Vikki, Sean and Adam plus Morse from Wiltshire. Our Treasurer Vera also came to enjoy the day, she brought her dogs with her but these are of the terrier variety.

It was lovely to see so many Bolognese most of which are in the most wonderful pet homes and it gives the owners a chance to discuss feeding and grooming and any worries that they may have. A great variety of sizes and various hair lengths and ‘hair dos’. Many comments were made on the walk from other dog walkers in the vicinity mainly about a sea of white cotton wool!

I did take quite a few photos inside the café so everyone could see themselves enjoying their time but unfortunately, for some reason the camera let me down.   Better luck next year, I hope.