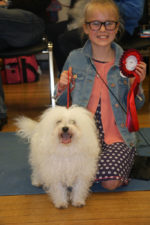 We only had an hour to set up the show as we couldn’t get the key until 9am. The weather was drizzily and the ground was wet, so we made the obvious decision to hold the show inside. When I saw the size of the hall, I thought great it’s big enough, we will be fine. I think I was imagining what it is like at the matches at my local ring craft – loads of space I thought.  As we were inside we planned to have the whole show in one ring pedigree followed by novelty. So we set out the chairs and tables and very soon people started coming, and coming and coming. I began to get worried. There were children, dogs of all sizes, trolleys and people everywhere. 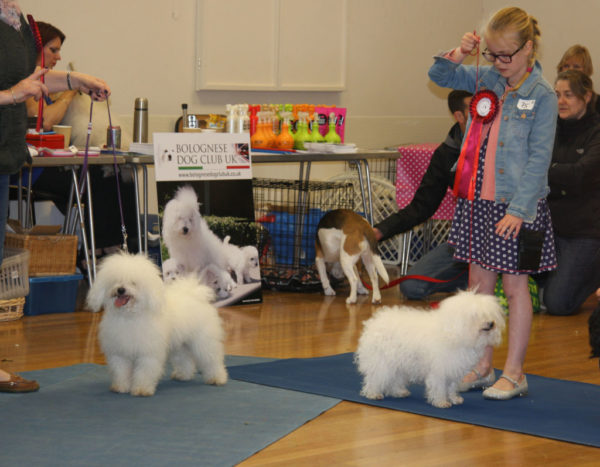 The registration queue never seemed to go down, so we were a little late starting and only managed to this by moving certain people to the front of the queue. The first pedigree class filled the whole ring and took about 30 minutes to judge and with 26 classes, I was even more worried. Our judge Tony Bray was very professional, he went over all the dogs as if they were at the most important of shows. Our novelty judge Daphne Fielding was patient and just perfect for the roll. Thanks again to both judges.

The Havanese class had 8 entries and the quality of the dogs was really high. One Havanese exhibitor came all the way from Derbyshire to support the show, I felt really honoured about that. The Havanese club brought their stand too so people could learn all about the breed. There was a Bolonka at the show, which is rather amazing as I did actually know the breed as a few people in Bolognese also have them.

Luckily the hall had a veranda area with an awning, so after we worked out how to work the awning we managed to spread onto the veranda. We had to run most of the novelty classes on the veranda, but people understood. Some of the novelty classes were moved into the main ring as they warranted the space. Best Trick class was so cool, the dogs were amazing. The kids handing was great to watch as well as the Fancy Dress. It was so good to see all the smiles from the kids and the adults when they received their rosettes. We had rosettes to 5th place and goodie bags for the Havanese and Bolognese winners.

I was in charge of the PA system and the photography and managed pictures of almost all winners and a group picture of the Havanese. However, I was sad not to manage a group picture of the Bolognese as they were not all in the ring together and there was so little time to get back in the ring. I was trying to get a Bolognese group shot, but Jane who won Best Male Bolognese was just shooting off. Next time this will be a priority and I am hoping that even more Bolognese will be there.

We served bacon rolls, tea coffee, cakes, rolls, cakes and other snacks. The judges cooked lunches were amazing and served on a table with a table cloth! Vera and her helper Rosemary were brilliant standing in the kitchen all day, they did a sterling job. People just helped, one guy from the Havanese group was amazing with the heavy work as we didn’t have many men on hand. One lady who was a friend of a committee member brought mats and a PA system and helped to steward, she was amazing. Netty and Caroline stewarded, but it was so busy we really needed 2 stewards per ring.

We had a big raffle and stopped the judging so we could draw the first 10 or so tickets for people to choose their prize. We didn’t want the Vodka to go to somebody who didn’t drink or the pink sequin coat in a Bolognese size to go to the owner of a male Labrador! 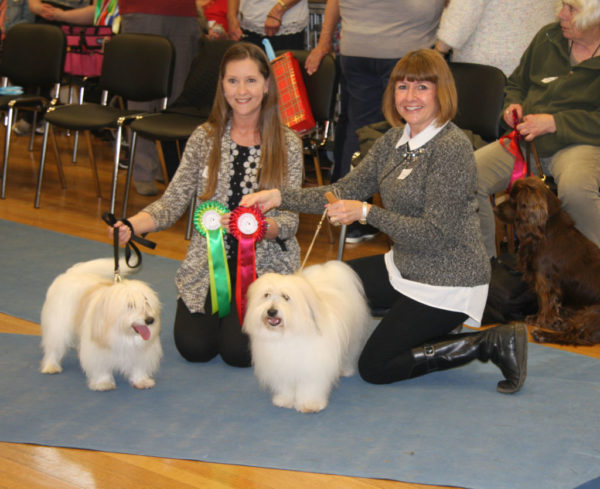 There was a lovely group of Coton Coton de tulear that joined us. The Coton people said wouldn’t it be great to have a Coton class next year. Many people thanked us on the day for a lovely time. Since then there have been lots of comments on social media and here are a few of them.

Super, well organised and friendly day lovely atmosphere
Fabulous day and lovely seeing so many children involved
Congratulations to you all for organising what was a very enjoyable show it was a great success
Thank you for a lovely show, we all enjoyed it

BIS & BP for the pedigree classes was a lovely Miniature Schnauzer and the reserve was the winner of the Havanese Class.

We had help from Sean on registration, Norma on raffle and Bruce on the club stand selling merchandise. Our nominated charity was The Cinnamon Trust and we are looking forward to sending them profits from the show.

All I can say is that it was a day to remember and cherish and it has raised the profile of the club immensely. We have learned quite a bit, so plan an even better show next time. Hopefully the weather will be OK for an outside show next time, so even more people will be able to come along and enjoy the fun. There is an album of pictures on the clubs Facebook page, go to www.facebook.com/BologneseDogClubUK

One thought on “Show Report 21st May Chieveley”