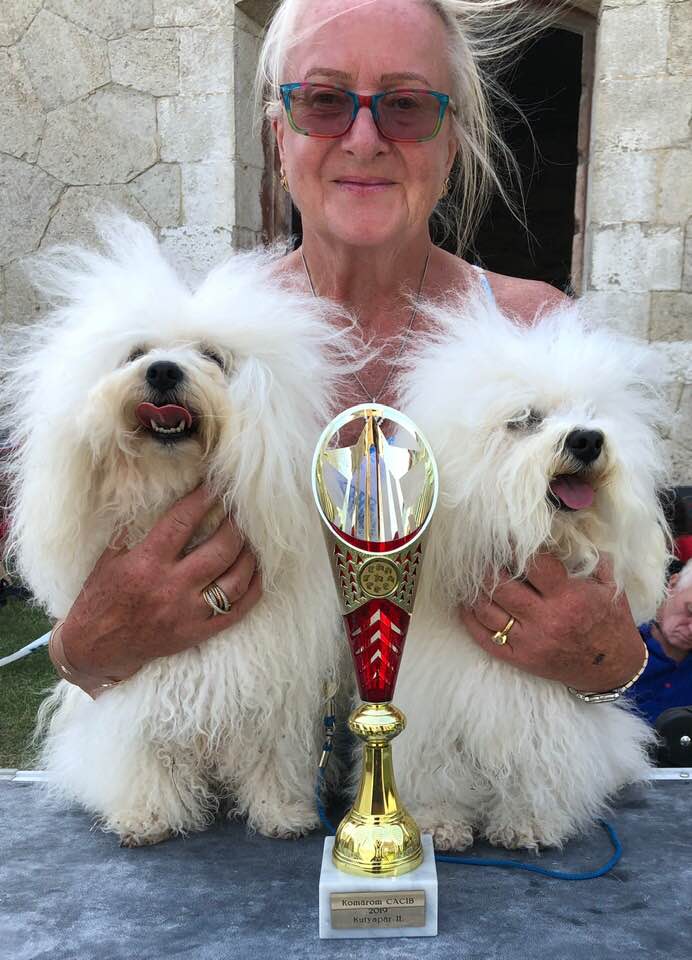 Our road trip to Hungary & Austria, by Virginia Dowty

As they say, ‘Only mad dogs and English Men go out in the midday sun’. However, a group of us from UK, Isle of Man and Ireland braved it with 4 breeds (12 dogs) to Hungary for 4 shows held on the European Circuit and then on to Wels in Austria for the European shows where the temperatures soared to over 35 degrees. Without our Totalcools we could not have survived it, they were our lifeline for humans and dogs.

The Hungarian shows were held in the grounds of an old fort at Komarom some 150 SW of Budapest. Rather eerily there were many old Russian tanks and armoured vehicles in the grounds, I can only imagine it was a Communist stronghold in the 50’s. In the main BIS ring there were displays by horses before the groups, I did wonder if we were going to be stepping through horse poo in the groups. It was however a well organised show, with 3 huge high open tents by the rings, which were blissfully cool. The ground and rings were challenging and full of burrs. Everything was on time which was more than could be said of the European and Austrian Winners show where the groups were running at least 1 ½ hrs late and all was a little chaotic.

Apparently the judges in Austria had been given only 1 minute per dog, a huge challenge given the numerous and various languages of the judges and stewards. There were some rings where neither the judges or stewards spoke a mutual language!  Apparently there were several fights at the Austrian shows. I personally witnessed a young girl being assaulted by a security guard for no reason. It was shocking to see. I also had a lucky escape as on day one part of an air conditioning unit at the entrance fell on my head nearly decapitating and knocking me out. But I can’t praise the security enough there as they were very helpful wanting to cart me off in an ambulance, which I politely declined!

At the Hungarian shows food and drink were excellent with a lot of choice and plentiful, incl buckets full of fruit infused water. We had great fun catching up with old friends and there were a few UK exhibitors.

At Komarom Hungary there were 4 shows for Group 9 inc the TKKE Companion dogs in Group 9 which is one of Eastern Europe’s biggest Toy Ch shows. We had a very warm welcome in spite of taking many of the top honours with our various breeds inc Res BIS with our Havanese. The judges were from all over Europe and Russia. The Bolognese entry was 16 dogs each day, it is no walk in the park as often dogs are downgraded, but fortunately all of ours got Excellents and several BOB. To make up a Hungarian Ch you need 3 x CAC and we had fun making up 3 Bolognese Ch, Hero, Otti, and Josie, Senga won 2 x CAC and just missed out on her title, I forgot to enter her in one of the shows!  Otti and Josie also won Res BIS Brace and new baby Hero’s son Vito won Best Baby Puppy x 4 and Res Best Baby Puppy in Show, handled by his co-owner Adam. Donald wasn’t shown as he was due out on his 8th birthday at the Euro show when he became a Veteran under FCI rules.

Then on to Austria a 2 hour drive away. The first show was on Saturday, the European Show with an entry of 34 dogs under Finnish Toy judge specialist Dr A Paloheimo. She is well known for being a very strict judge, and to the breed standard and I was delighted that she shared my belief that the breed should not be trimmed. She told me she adores the breed and the naturalness. In fact the whole show was so strict, no powder, no sprays, no hairdryers….nothing….and officials kept coming around checking all the time. One overseas Bolognese exhibitor was threatened with removal for using powder and the judge came over to her to warn her. It was a real challenge to have no grooming aids at all except a comb! Many dogs were awarded only Very Good and Good incl the dog who BOB at Austrian Winners show the next day. The Euro BOB, CAC, CACIB came from the male Ch class, a lovely Finnish dog Aquavit Piece of Puzzle owned by Susanna Nikkila, Radamantino Dante, the Crufts BOB took Res CACIB and Otti was 3rd in Ch class out of 7. Best Junior was Meandi’s Lucent Lennox. Our Lafford Hero won OD and CAC beating his brother Lafford Milky Bar Kid, and my old boy Bolognese Star Donald At Havanese Stars (Donald) won Veteran male and BOBV making him European Veteran Winner2019. BOS, CAC & CACIB was Garisdene Sonchka Stella Mia from Intermediate class, and Res BB CACIB, CAC was my Clarchien Rock With You (Senga) in OB. Clynymona Jo I’m Alone (Josie) won Ch bitch and CAC. Unfortunately we missed the Brace class as it was never announced by the steward nor was it in the catalogue and we thought we had to go straight to the BIS ring. The show secretary apologised to us later for the mix up.  There were no Baby Puppy classes at either Euro or Austrian Winners show.

The next day the Austrian Winner’s show under Russian judge Elena Kuleshova yielded very different results, the BOB was Finn Aphaia from Italy who only got Very Good the day before, Best Junior female Pici Pelheyes Victoria who also only got Very Good the day before. Best Junior male was the same as at the European show and he was a lovely example of the breed. Josie won BOS, Ch B, CAC, CACIB and Senga OB, CAC & Res CACIB, and Hero won OD, CAC & Res CACIB. Otti was 2nd in Ch male and Res CAC and Donald once again Best Veteran & Austrian Winner Veteran.

It was good to see our UK dogs can compete and win against the European dogs many of whom are heavily trimmed especially the Italian dogs. Our Crufts judge 2020 Barbara Muller is from Switzerland where they are also very strict about, no powder, no sprays etc so it will be very interesting to see her judging.

One thought on “Only Mad Dogs and English Men”