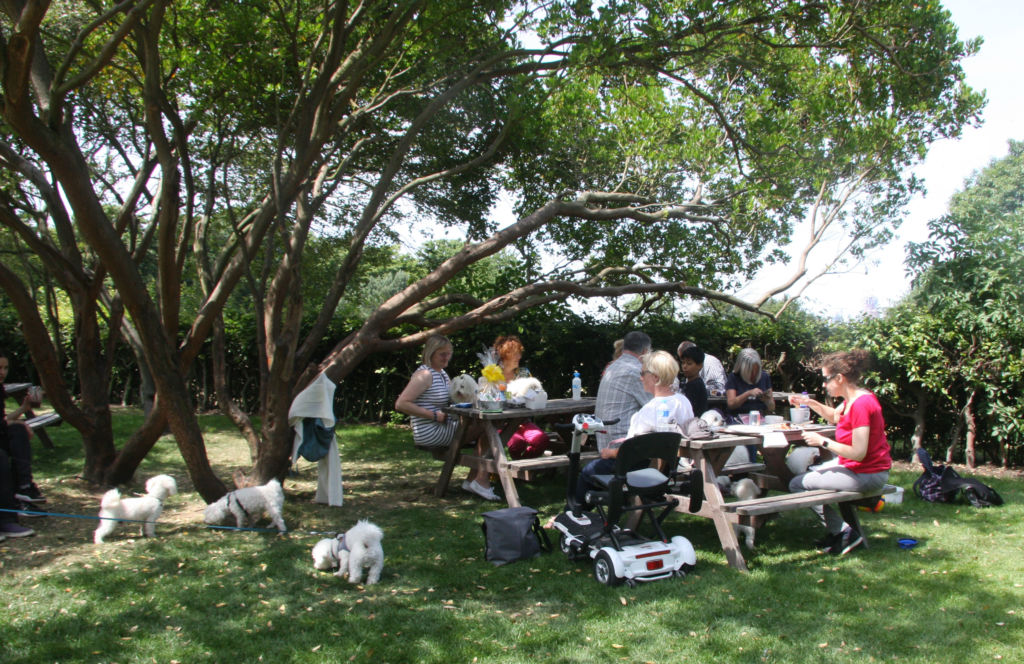 It was a hot day on the 24th of June for the Greenwich Park MEET UP, but since then the temperatures have risen even more, so lucky we had it when we did. It was easy parking in the park, right by the cafe and easy to get to just off the M25 & A2. We all met up as planned at The Pavillion Cafe and the dogs started to get accustomed to each other. The cafe was very dog friendly with lots of outside space and big containers of water. Unlike being at shows, the dogs were free to do their own things, which made life interesting. Generally they all got on well, although as you would expect some of the males tried to dominate. We also had the added complication of one of the girls, just coming in season! 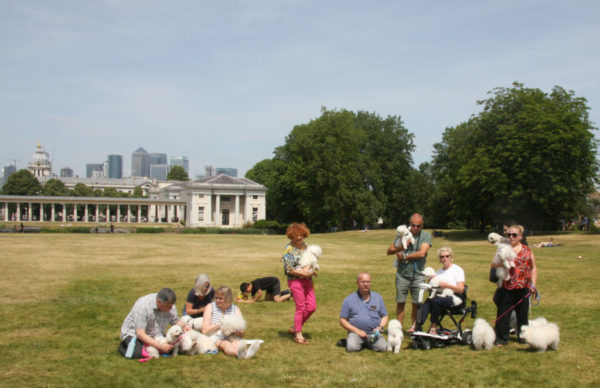 Paul knew the park and set us on a nice walk, taking in the sights both inside and outside the park. There were 14 Bolognese plus little Alphie a cross Maltese. Diane & Mark Whateley brought 4, Bella, her daughter Cara and son Max and Diane’s Mum’s dog Mia. Paul Irvine 3 Bolognese Gianna, Minnie & Rory, Teresa brought Pusha, Jennie her puppy Fizz, Martin Biron was with Max and Carol Martin her 2 Florence & Fabio. Lily Geogion heard of the walk via facebook and came with her dad and their Bolognese Luigi. Lily told us after the outing, “The meet up was fantastic and we all had a great day”. We heard that Lily ‘s Bolognese Luigi has his own Instagram, his page is @LuigiFromLondon. Old timer Candy was there showing everybody what to do as if she owned the park! 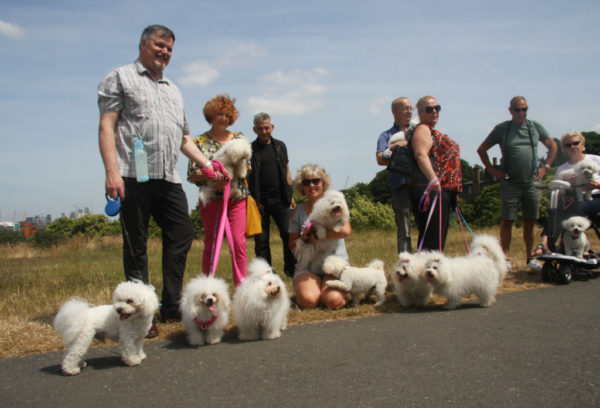 After a walk and a good chat and some stops for photos, we arrived back at the cafe. At the cafe, we re-arranged their garden by moving tables under the tree in the shade, but nobody seemed to mind. England were playing in the World Cup that day, but we kept an eye on the scores and England won. Due to the football, we think the cafe was a little quieter than normal, so it was easier to get food and drink than it could have been. Apparently there can be long queues on a Sunday.

Two ladies from the cafe came out to judge our little competitions for prettiest girl, handsomest boy and best hair doo. We did a nice raffle of a big dog bowl filled with treats and toys and that was won by Jennie and puppy Fizz. Handsomest Dog was Max, Prettiest Girl was Gianna and Best Hair Doo went to Cara. They all won prizes to take home. We took £48 on the raffle, which made a nice profit for the club. Thanks to Paul Irvine for helping organise this great venue and for checking out the cafe in advance. 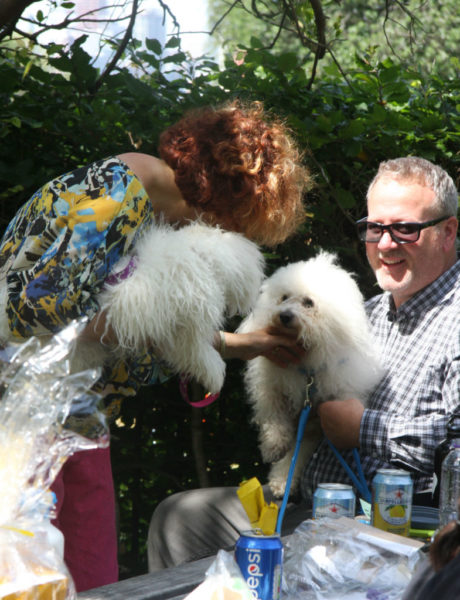 Jennie from Guildford very kindly sent us some feedback saying, “As Fizz and I approached the Pavilion Café I could see a swirl of beautiful Bolognese – all ages and sizes with differing hairstyles.  I was immediately made to feel so welcome and part of the group. The setting was wonderful I had never visited Greenwich Park before and was entranced by the superb viewing points right across London and Canary Wharf in one direction and then across to the Queen’s House in the other. The park is just beautiful and it felt as if we were in the heart of the country in the depths of the city. As a total newcomer to the breed I found it really interesting to listen to the conversations around me and join in – I have picked up all sorts of tips and made some new friends”.

The next Bolognese MEET UP is planned for Sunday the 7th of October in The Botanic Gardens Southport in the North West. We went there last year and it was a great success, nice gardens and cafe. More specific details will follow on the 7th of October MEET UP. Please note we have changed this date from previously given in a newsletter.

If you have a suitable venue near to you and would like to have a small get together of Bolognese, do let us know and we will help you to arrange it. More pictures from our day in Greenwich Park can be found on the club’s facebook page at www.facebook.com/BologneseDogClubUK