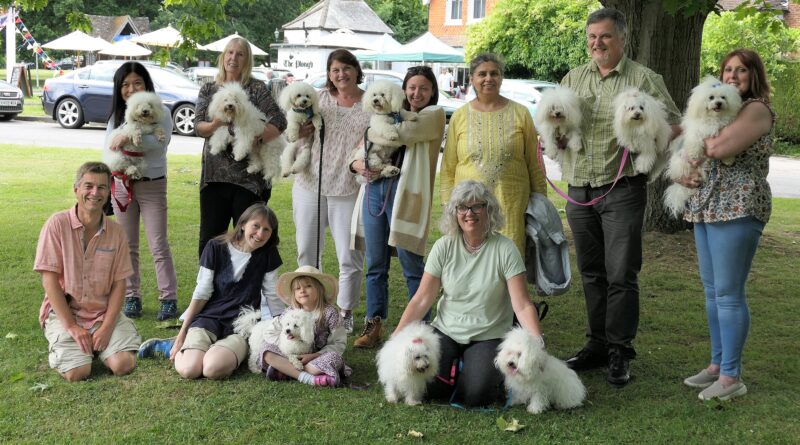 On the 19th June a group of Bolognese owners met in a lovely village near Reigate in Surrey called Leigh. The pub was The Plough and it was positioned on the village green near a church, it was idyllic and a great choice. We weren’t sure about the weather, but in fact it was ideal, dry and not too hot. We managed to all sit together in the front of the pub. The landlady was great, we had table service and individual bills. So we didn’t need to keep going inside for drinks and the dogs were no trouble. It was Father’s Day, which we didn’t realize when we set the day, but as we were there early all was good.

After a good chat, food and drink, we had a free raffle where everybody won a prize. Deana won the top prize, but kindly saved it for the second person as she won the first prize last time. John’s daughter Karina was really happy to win the main prize in the raffle and her girl Bella was also the prettiest girl dog. Little Bella was so keen on her toy slipper she won for Prettiest Girl she couldn’t wait to get hold of it. Handsomest Dog prize went to Dino who belongs to Vicky & Greg Carpenter. Vicky & Greg came along with 2 Bolognese Dino and his brother Enzo, apparently the 2 boys get on really well and bringing another male into the household has not been an issue. Vikki & Greg’s lovely daughter Lily was also with us. We have met Lily before at a MEET UP and she is great company.

After food, raffle and prizes, we were off for a circular walk across fields. The weather was overcast and there was a slight breeze, so perfect for dog walking. It was single file for most of the walk and we had to cross quite a few styles which was an unexpected challenge for most of us. At one stage we went through a field with a bull in it and another field with a sign saying ‘SHOOTING IN PROGRESS’. With the styles, the bull and shooting, I was really pleased to count everybody back in at the end of the walk. As it was a circular walk, everybody had to stick with it as they would never of found their way back on their own. After the walk I asked everybody what they thought and they all said they enjoyed the walk and would do it again.

Many of the dogs were related. Athena owned by Deana Mee met up with her son and daughter from the same litter Julian & Kahwei’s Clara and Vikky & Greg’s Enzo.  Bengi owned by Suzanne & Nigel and Bella owned by John, Karen & Karina were also from the same litter and bred by Carol & Dennis Mulligan. I brought Harry and Lily mother and son and Lily (now 11 years old) loved the walk and kept bothering everybody for a treat.

Paul & Neelu Irvine came along with Giana & Mini. I felt that Paul & Neelu were a little out of their comfort zone hiking across fields, but they did say they felt quite empowered by the end. So well done Paul & Neelu, you will know what you are in for next time!

After an initial settling period, all the dogs got on well, even the un-neutered males. So, I have to say that the MEET UP was a lovely success. Thanks to John Twaites for setting it all up and The Plough for accommodating us.

More pictures can be found on our FACEBOOK PAGE www.facebook.com/BologneseDogClubUK

The next MEET UP is on the 17th of July in the Fleur De Lys pub on The Stratford Canal in Henley-in-Arden Warwickshire. CLICK HERE for full details. We will also be meeting in the West Country in the Autumn.