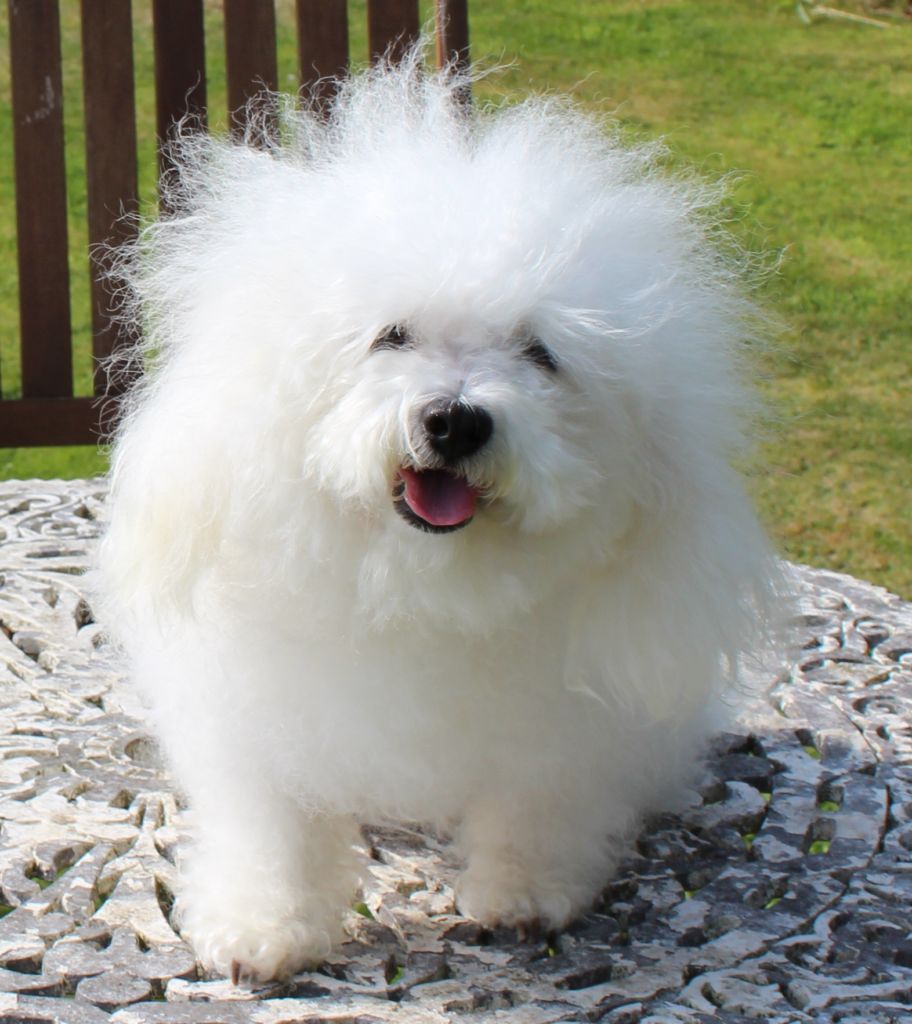 Amor is now 13 years old and he was my first male Bolognese. I bought my very first Bolognese dog a female in 2003. By 2005 I had the ‘Bolognese bug’. I wanted to have puppies of my own which I went on to have. In 2008 we were lacking male Bolognese in the UK. We desperately needed ‘new blood lines’. In addition at that time ‘our’ Bolognese were on the big side.

I wanted different blood lines and lines that I thought would be beneficial. I was introduced to Baerbel Fricke through my Dutch best friend Carolien Jongejans and her husband Ruud Jongejans. Baerbel was a longstanding breeder of Bolognese but most importantly she adored and cared about her dogs. Indeed she had bred Opal Marchenwiese a Champion who I think was, and still is, the best male Bolognese ever!  Opal is Amor’s Uncle.

In June, 2009 Amor was 10-months old before he was allowed to come to the UK on the pet travel scheme. We drove from the UK to Leipzig for him.  Baerbel brought him to our hotel for us to see. She wanted him to get to know us gradually. So over the next week we saw him nearly every day and Baerbel was a great host showing us both around the beautiful city of Leipzig.

Amor’s first show was Blackpool Championship Show. The judge was Geoff Corish and although Amor was nervous he won is class. Amor is a very square dog of smaller type, well muscled with a very white coat and excellent pigment.

At that time I had 4 female Bolognese. Two females had come from the Shiarita Kennel and two I had bred myself. It was a nice summer that year and Amor liked to be outside for most of the time.  From the outset he adored the girls and would protect them in his own way. We live in a rural location so not many neighbours but there is a public footpath that runs past our house.

If anyone was walking past Amor would stand in front of the girls and bark at whoever walked past.

He has always been a sweet natured dog.  His tail never stops wagging and he just loves lying on his back having his belly rubbed.  He has been shown here in the UK and a few shows in Europe and he always got placed but he did not like being shown.  On the table his tail would go down. Even in the line up I had to constantly talk to him otherwise his tail would drop. So we decided to retire him. One of his last shows was in Germany where we met up with Baerbel and had a fantastic few days together.

Amor has produced many offspring, some have gone to live in Holland, Belgium and USA. Some went to show homes and have done well in the show-ring.  He produced two males who have been placed at Crufts. He is father to Moorhey Dolly Daisy who was consistently placed at UK shows and also gained Reserve Best Bitch at Crufts under breed specialist Greta Franklin.  He sired Moorhey Angelica who won Best Puppy Bitch at Crufts. He, more recently sired Moorhey Flower of the Meadow who gained Best Puppy at Leeds Championship Show and recently came second in her class at the British Bolognese club show.

Amor at 10 years has still got his fabulous white coat and dark pigment.  He has lost a few teeth but is very fit. He enjoys his walks and is partial to goat’s milk and his favourite meal is his Sunday Breakfast, which consists of Bockwurster Sausages, egg, ox-tongue and the odd lamb’s kidney!