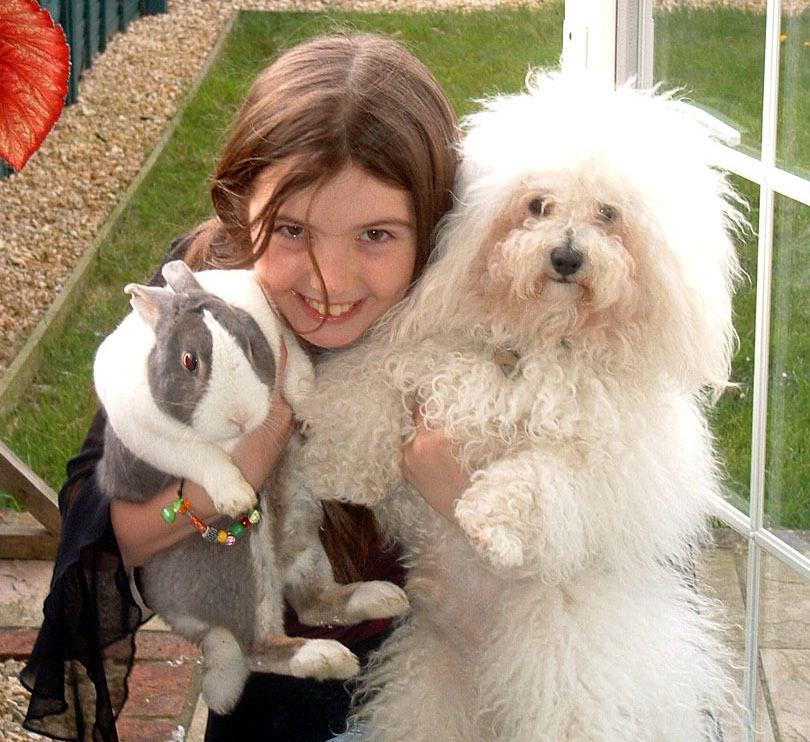 This is a picture of our first Bolognese ‘Spaggy’ taken with my daughter in 2002. His Kennel Name was Chazard Napolatana. The Rabbit was called ‘Peter Tinker’. My daughter chose his name and she was only eight, hence the name Spaggy. My mother didn’t like the name ‘Spaggy’, so she called him ‘Bollie’. I often called him ‘Boysie’. We had him for 10 and a half years. We bought Spaggy from Jill Richards and his father was an imported dog called Poyken. We met Jill at Crufts and said we were looking for a dog to show in Junior Handling. So he was my daughter Ellie’s first dog. We moved from a rented house to our own house and I promised her a dog. I had read a Rare Breed Supplement from Our Dogs and noticed the breed which I had not heard of before. My daughter was asthmatic and allergic to cats, so I thought the breed looked ideal for us. I fancied the idea of a rare breed and didn’t like dog hair in the house! Ellie was only 8 at the time so Spaggy used to walk to the school twice a day to take her and collect her, he was well known in the area and many of her friends adored him. Spaggy was very friendly with all dogs and loved people, we could not fault his temperament. He wagged his tail all the time, I wouldn’t say he was the cleverest of dogs, but he was happy and lovely and from him, we ended up getting very involved in the breed, showing breeding and now running a dog club! We have so many friends in the breed now, so it’s all thanks to Spaggy Boy.

My daughter did Junior Handling with him and she did well, she took to dog handling. After 5-years we introduced a bitch to the home Candy, with the view to breed. Spaggy did have one litter of 2 puppies, one being Buddy who lives in Jersey with Margot & Brittany Le Guyader . There was also a bitch that went to live in Derby with a retired lady and we have heard from her a few times saying that the little girl is a treasure.

Spaggy’s temperament was friendly and laid back, he had a very full coat, which we did have clipped off for the last few years of his life. He was relatively healthy, although he suffered from unexplained back and neck pain from time to time, needing anti inflammatories and sometime pain relief. Unfortunately he suffered from a slipped disk in his neck at 10 and a half years old and we thought it too much for him to go through the surgery, so we had to say goodbye to our lovely Spaggy Boy. He did have a short neck, so I am not sure if that had anything to do with his medical issues. He was terrible for peeing up the leg of the dining room table (probably because i had a bitch in the house), but as soon as he was neutered that stopped overnight. We have replaced the flooring now as it was all curled up at the edges!

I think of Spaggy from time to time and still miss him now, he was a lovely boy.

If you have a much loved Bolognese that you would like featured in the REMEMBRANCE area, please email your picture and story to info@bolognesedogclubuk.co.uk