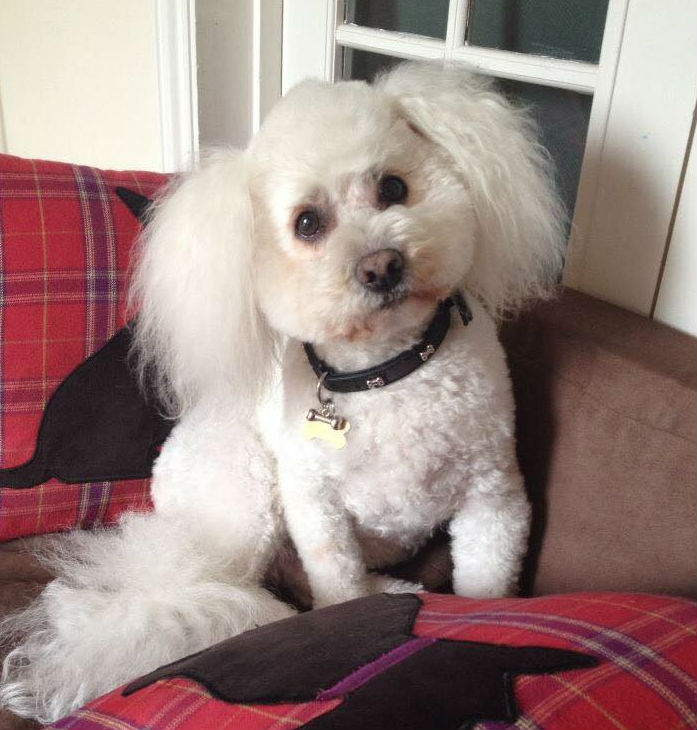 I wasn’t sure what to expect having only seen photographs of Bolognese. When Liz went to get the dogs Khushbir’s Dad Beau Regarde came running into the room flying towards me and jumped straight onto my knee and started licking my face all over. He was just adorable and I had already decided to buy the puppy at this point before I even saw him. Liz appeared with two puppies and they rampaged around the room. Khushbir kept running up to me in between playing with his brother and I decided he was the one for me because he was the bigger boy and he seemed to like me as much as I liked him. He then came home to London with me that same day.

I remember he was so playful he wanted to play all the time he was such a bundle of fun. He quickly took over the house and stole my heart. He could be a stubborn boy and was quite wilful he did not like being left in the kitchen to sleep at night and barked for hours. I took advice from the Dog Handlers at work in retrospect Police Dogs are probably a little different to Bolognese! I modified the advice to suit my little ball of fluff, but it worked and he never barked at night again.

But of course he WAS in charge because a few weeks later after he was toilet trained he soon found his way upstairs to HIS bedroom and HIS big comfy bed. Although he could be a bit naughty at times it was just impossible to get angry with him he was completely adorable. We had to leave the Puppy Training class because he was so besotted with another little white girl dog that he spent the whole class barking and frantically trying to get to her.

Time out didn’t work and after persevering for four or five weeks I decided to train Khushbir at home. We trained each other and developed a wonderful relationship with each other that lasted the rest of Khushbir’s life. I remember that every year I bought Birthday and Christmas presents for Khushbir in addition to a Birthday Cake. I must admit I ate most of the cake!

He soon became an expert at opening wrapped presents. One year I took him up to Scotland to my Mums for Christmas. My Mum was in the habit of putting all the Christmas presents under the tree on Christmas Eve. The next morning when Khushbir came down all he could see were lots of presents for HIM or so he thought. He was so excited he started ripping over everyone else’s presents! Several days later we discovered that he had also been peeing on my Mum’s real Christmas tree which was much better than going outside in the cold Scottish weather to pee.

As time passed I found out about the Bolognese Club and joined up. By this time Rani my beloved Scottish Terrier girl had joined the family. I can’t help but laugh when I remember Khushbir’s first meeting with her. I had driven to Devon to buy Rani and Khushbir seemed fascinated with her until that is we arrived home. He was very frisky but as soon as he found out that he wasn’t going to get to do what he clearly wanted to do with Rani he seemed to lose interest in her and never really played with her again. She loved Khushbir and I’m sure in his own way he loved Rani too because he was so lost without her when she passed away in February 2017.

Many people will be surprised when I tell them that Khushbir weighed around 12 Kg. He really was the tallest Bolognese I have ever seen but he was not overweight. When I took Khushbir up to a Bolognese Club dog show I laugh now thinking back because I was so surprised that there were so many puppies there. I soon found out that they weren’t puppies it was Khushbir who was huge!

I have so many wonderful memories about Khushbir I feel so privileged to have been lucky enough to have had Khushbir to share my life. I can never forget him. He really was such a special happy boy.

His name is two Punjabi words Khush meaning Happy and Bir meaning brave. He truly was the Happiest Bravest boy.

I like to think of Bolognese dogs as fluffy angels that have come down to join us and I hope that one day I will be able to join my beloved Khushbir and of course my darling Rani too.