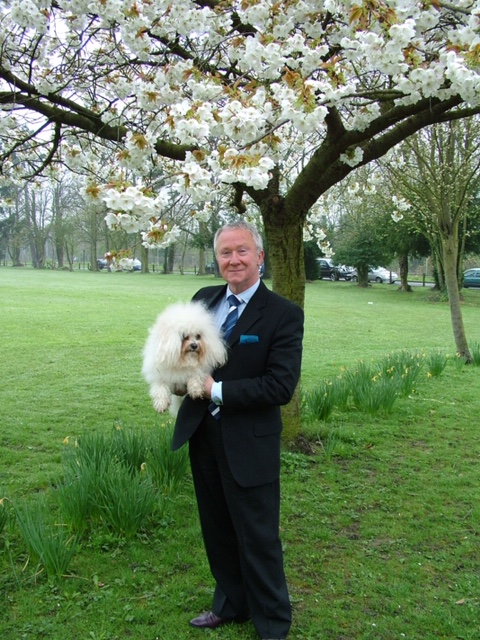 Although I have now had two Bolognese dogs, our first dog was a King Charles Cavalier Spaniel named Rufus. He was acquired because our son was terrified of all dogs. We got him as a puppy and loved him dearly. He was a tricolour and small and delicate. He was a real lapdog, every time I sat down, Rufus was on my lap. He also cured Richard of his fear of dogs. Rufus lived to be twelve years old. Very sad when he died and we decided not to replace him because I was working.  After years of a dog shedding black hair everywhere, I thought we needed to think about the breed!

A few years passed by and I was going to retire from teaching. We had thought about breeds and had decided on a Bichon Frise – small, white, non- moulting and cute! One of my husband’s sixth form students suggested we borrow his family pet Bichon for a day and we thought she was a lovely little thing. My husband was speaking to a work colleague who was also a dog show judge and he had just seen some Bolognese dogs. In fact, he knew of a breeder who had a litter of puppies. Down we drove to Leatherhead from Harpenden and had a lovely time with these adorable puppies and their mother. We had to have one! The breeder said we could have first choice from the next litter. I retired from teaching and waited.

It was nearly two years before we heard that there was going to be another litter. On March 30th 2003, the litter was born. We had decided to have another male. After playing with them and studying them, we picked out the smaller of the two. Pico became our new little darling puppy.  And that is how we acquired a Bolognese!

He was a sweet little character. He loved his new home. We put a baby gate on the kitchen door and the small galley kitchen became his room. The only problem was, Pico could slip right through the bars of the gate! He grew, he eventually became house trained and loved his walks around our neighbourhood and parks. I was so impressed with the playfulness of the breed and the way he flew over the doorsteps. He was just what we had wanted.

The only problem I had was with the grooming. I did my best brushing and getting rid of the matted bits. I didn’t know any other Bolognese owners to get advice about the coat. I tried to contact the breeder but without success. He wasn’t the pure white but what we called champagne colour and his eyes were stained a bit. It didn’t matter because we loved him just as he was.

At that time, I used to travel to the USA to visit friends in SC. My husband was left in charge of Pico while I sunned myself for two weeks. During that time, Pico went to school with Jeffrey every day. Jeffrey was head of the Sixth Form at St. George’s School, Harpenden and had his own office. So Pico was installed in a chair in the office while Jeffrey did his work. He became a member of the classes being taught in the large office and was even brushed by some of the students. He travelled on trains and visited schools.

Pico lived to be 14 and 9 months old. The last five years of his life was challenging to all of us. At 10, he developed diabetes. We were able to control it with insulin injections twice a day. I also had his coat cut off to make it easier for his injections. He gradually developed cataracts and slowly lost most of his sight. He still enjoyed playing and chasing about the garden. He loved his walks and greeting people he knew. We had a few distressful emergencies when I wasn’t sure he would survive. He did bounce back several times. Then it all happened again. We visited the vet, he stayed in overnight on a drip, I got him the next day and decided Pico had had enough. I arranged for the vet to come to the house but that never happened. When I brought him home, he walked around the drive over and over again, then came in, ate some raw mince, went to his bed where he stayed, in front of the fire, nice and cosy. I think he was dying so I phoned the vet and we put him to sleep. I was very upset it sure was an empty house.

Christmas came and I had a little shrine for him by the fire. I wasn’t meant to have another puppy but as soon as Christmas was over, I sent a request to Melanie for a new puppy. And, a few months later I met Deana Mee and Luca. That is another story!