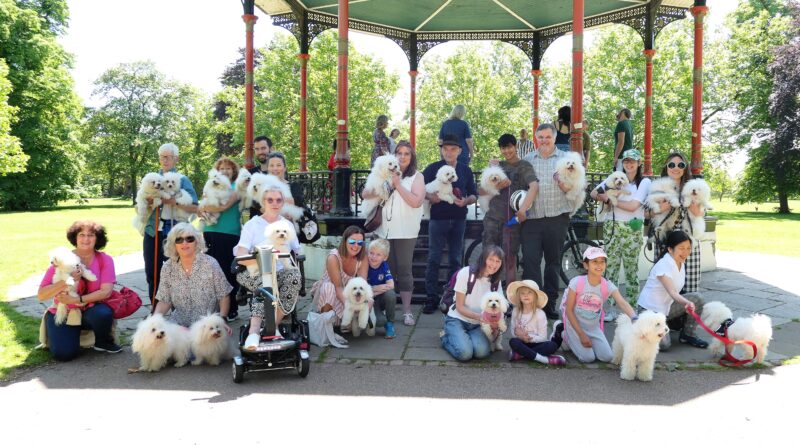 It was fabulous to see so many old faces and some lovely new ones on Sunday 22nd May in Greenwich Park, London. The park is so large and a friendly place especially for dogs. It was dry and warm, so what more could we have asked for. We met by the Pavilion Cafe and one after another small white dogs begun turning up. Suzanne O’Shea was the first to arrive with her young boy Benji, who was actually 1-year old the following day. Benji met with his litter sister Bella owned by John & Karen Twaites and their daughter Karina. The 2 families meeting with puppies from the same litter was a lovely surprise for them.

Maria Cardini and her Bolognese Lui enjoyed their time, Maria saying she would not have missed it for The World. Lui is a male dog originating from Italy and in stunning full coat. Emily Wong was new to the group and she brought her 2 girl Bolognese who are from the same litter and named Gin & Tonic. Gin & Tonic are like 2 peas in a pod and they took everything in their stride. We met Kahwei Ng & Julian at MEET UPS last year, so their girl Clara seemed happy to mingle. Our great club supporter Jennie Hegarty bought little Fizz and enjoyed all the doggy talk and shared experiences. Paul Irvine and his son Khush were accompanied by Mini & Gianna who again have supported our Bolognese MEET UPS from the beginning. Its lovely to see Khush growing up and continuing to love the dogs. Laura & Michael Eviston seemed excited to see us post COVID and their boy Rory had just come back from the groomers so looked fabulous. Laura Bellamy was another new face with her boy also called Rory.

Carol & Gary Martin are true Bolognese enthusiasts too and they have become part of the London group for a few years now, their Florence is always popular and loves winning prizes. I brought  Lily and her son Harry and also loved seeing 2 dogs that I had bred looking so well and happy. One of mine Minty came with her dog walker from the other side of London. Luigi, Mario & Lily joined us, with Luigi doing his own thing like usual. Thanks also to Mariana Trancotescue for bringing her Bolognese Bella, Michaela Harrison with Toby also to Nelsy and Carlos Velasquez and their children Theo and Eva with Bolognese Lyra. Thanks to everybody for making such a lovely group of enthusiasts for the breed and quite a spectacle for those around us. We had 2 Rorys and 2 Bellas and altogether 20 dogs (including 2  guest Bicon Frise).

When we were all gathered, we set off for a short walk and stopped at the bandstand for a group picture. I cant remember who suggested the bandstand, but whoever it was thanks good idea. Thanks to everybody who took pictures and videos helping to make a lasting memory. A special thanks to John Twaites who managed to get the amazing group shot by the bandstand. A picture with everybody happy and the dogs looking in the right direction is hard to achieve, but we did. The bandstand backdrop is nice too and if you look closely you can see ladies doing salsa in the background. It was a hot day, so we kept the walk short and returned to the cafe for some activities.

Paul won the main raffle prize and in the end everybody who bought tickets won a prize. We run some fun quick competitions with prizes. The ‘Prettiest Girl’ prize went to Florence, the ‘Most Hansom Boy’ was Rory Eviston, ‘Best Hair Do’ was Lui and Best Veteran (over 7-year) was my Lily who will be 12 in December. We also had a display of some Bolognese dog tricks with Karina aged 7 stealing everybody’s heart with Bella’s trick. Well done to all the doggy tricksters, it was fun.

There was a group of children about 10 years old right next to our doggy group by the cafe (it was a birthday party). Well the kids of course thought it was amazing that we were there and they were very interested in our games, asking me all questions and getting excited. So, I let the kids jointly do some judging and an adult grouped together with them to hear their results before it was announced. I have to say their choices were unanimous and each winner they picked was a good choice. The kids were really fun, I felt like the pied piper, they were every where I turned. The children were from various nationalities, really cute and they enjoying the time with us before their Pizza came.

I had almost lost my voice by the time I got home, but am glad to say that it couldn’t of worked out better. We are lucky to have lovely dogs and lovely owners too, see you all again soon I hope and thanks everybody for coming.

Two more MEET UPS Booked so far for this year