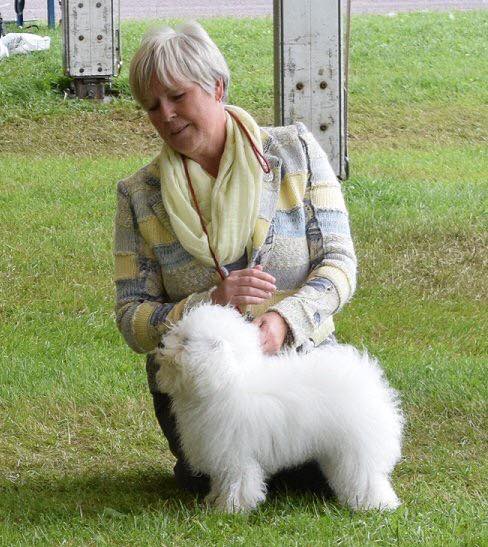 It is a question I asked myself many years ago. I was fascinated with the world of show dogs and worked with a lady who is still very active in the world of dogs. I wasn’t from a ‘dog family’ other than the general mongrel pet and had never been to a dog show. However, I was lucky enough to buy my first Golden Retriever from a respected breeder which gave me an idea of what a good dog looked like, albeit as a pet, but was too nervous to even think about showing or indeed ask.

Aside from all the jargon (every sport has some), how on earth did people keep their dogs in such beautiful condition and immaculately presented, more importantly just where did they find the time? For me as the innocent spectator, Crufts was the Holy Grail (of dog showing) and was only for experts; never would a novice like me stand a chance. How wrong could I be? Consequently I shelved the whole idea and got on with my life. I enjoyed my dog and kept him impeccably trimmed and presented.

Yet, almost twenty years later, the fascination with dog showing was re-ignited by the arrival of a Bichon Frise puppy. Due to the nature of their coats, I had to teach myself how to groom him and how to keep him tidy. When learning about the best way to keep my dog in a healthy condition, I felt more confident in wishing to give dog showing a try but still needed a push.

Unfortunately, I had lost my Bichon unexpectedly at aged 8. When I was setting about getting a new dog, I chose a Bolognese, which is similar to a Bichon for the uninitiated, being small, white and fluffy! I diligently did my homework and contacted breeders who had puppies; no mean feat, due to them being a very rare breed.

The stars must have been aligned on that day as my life was to change for good. Whilst I was waiting for him to be ready to join us I mused that I might quite like showing him and this time I was going to go for it. So on a sunny October morning I loaded up the car with my dog crate and turned up on the doorstep to collect him from the unsuspecting breeder and just casually mentioned that I might consider showing him.

Little did I know those five words would be the beginning of not only a lovely friendship, but also the road to showing and breeding these amazing, intelligent little dogs.

For those people who know me they will know I don’t do things by halves and throw myself into everything 100%. My motto is “If a job’s worth doing, it’s worth doing well.” So what was it that made the difference you may be asking yourselves?

Yes it is a desire to participate but more importantly I believe it is having a great mentor who has the desire and time to help you. This is the person who steers you through, from collecting your puppy to taking it to its first show. The person who helps you with the mire of jargon required just to enter a show. What do the rules mean, which class should I enter, how do I go about training my dog? Where do I train my dog, what leads do I need?  The questions really are endless.

They are also the person who is on the other end of the phone to hear about the knots in the dog coat during coat change, the naughtiness at the ring craft class, the endless fears about getting it wrong. I could go on.

Then you have your first show and your mentor is there to hold your hand, encourage you even if you are, despite all the classes, woefully unprepared, never being judgmental only supportive. Guiding you through the pitfalls but equally letting you make your own mistakes.

So, if you want to do it and can find the time do it, don’t listen to the negative.  I can promise you that you will meet some lovely people and even perhaps a lifelong friend along the way!

There are mentors out there for anyone who wants to show and I’m sure many can be found within the member’s area of the Bolognese Dog club UK.