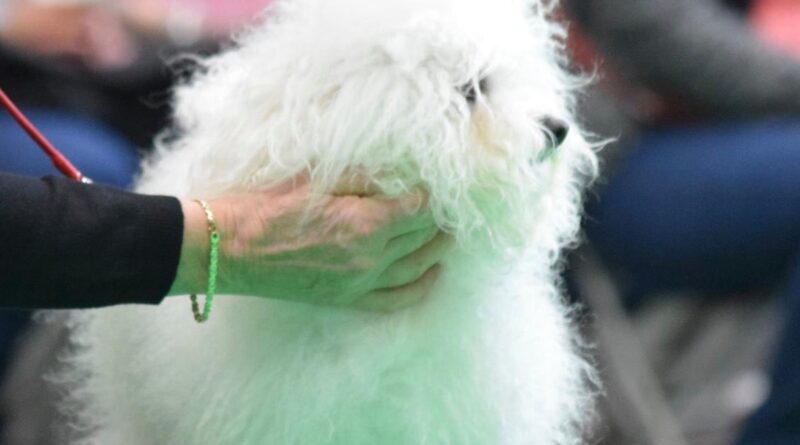 Hector entered the world just after midnight on the 12 September 2016. This was the first litter from Lulu (Tumbril Tennessee Honey with Enjanicka) and Ken (Gyongyosi Pelyhes Kentaur to Tumbril). Although not a textbook birth with a visit to the vet and loss of a female puppy a few hours after birth, whilst tinged with sadness we were still very excited with the results and all my energy had to be put into the two boys.

Lulu proved to be an amazing mummy and the puppies grew and flourished. We had hoped to keep a girl from this litter, but of course not keeping one of the two boys was never in question. The timing of their birth lead nicely to the kennel name Enjanicka Midnight Blue (Hector), his litter mate was Enjanicka Midnight Hour as he was born on the stroke of midnight and Hector shortly after.

As a Puppy
The choice between the two was almost instant, Hector was so calm and relaxed, quietly confident and had a proper little swagger from the age of 7 weeks. He had lovely proud movement, which he still has today and was very easy to train. He started his show career at six months old and was awarded with Best Dog Puppy at UK Toy and Best Puppy at the Bolognese Club show on the same day.  I was bursting with pride for a dog so young. He continued to win consistently throughout 2017 but just missed out on Top Puppy that year to his ring mate Lafford Hero, however we were thoroughly pleased with his progress.

Hector Achieves a Show Merit
As Bolognese aren’t awarded CC’s we decided to have a go at achieving his show merit. This is awarded at open shows but is very difficult to obtain as there are few breed classes so most of his wins needed to come from AVNSC. Hector did amazingly well and due to a change in the KC rules we needed to achieve this in 12 months. We managed to gain the points needed just in time and at the end of 2018 Hector became Enjanicka Midnight Blue ShCM.  A truly proud moment as believe only 3 other bolognese hold this title.

Amazing Show Career
We continued to show Hector and he has consistently won BOB, BD and RBB and several Toy Group 1 places at open shows. There are too many to count. He was shown at the World Dog show in Holland in 2018 and was given a 3rd place “Excellent” by eminent Italian bolognese judge Francesco Cochetti.

He also sired his first litter in 2018 when he was mated with Lola (Tumbril Texas Rose), producing the inimitable Boo (Tumril Tickety Boo), who gained Top Puppy 2019 and the first bolognese to get a group 2 place at a championship show.

Lovely Personality
Hector isn’t only a show dog he is also a family dog and likes nothing better than playing chase and rough and tumble with the puppies who sometimes come to stay. He has such a beautiful temperament and is as patient as a saint.  He also loves to play in the garden with my little 2 year old grandson when he comes to visit, being his partner in mischief.

Hector is still very active in the show ring as he is only 4 years old and one day we may win Crufts ! To say I am proud of him is an understatement; it isn’t just about his wins its everything about him. He is a polite, amenable and proud little dog who will forever be my friend..